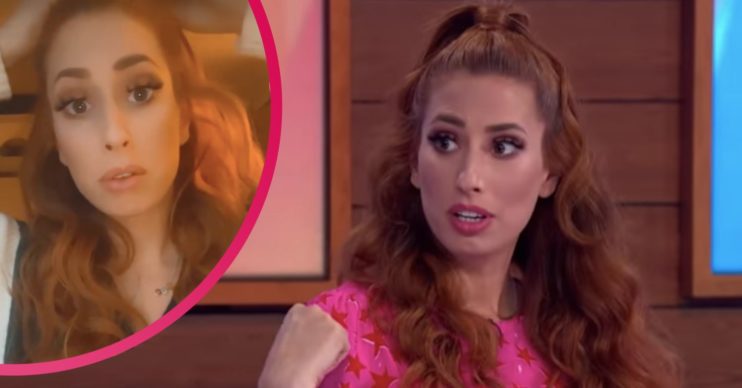 Stacey Solomon has told fans she is still suffering from exhaustion, even asking fans: “What’s wrong with me?”

Just a fortnight ago, the Loose Women star revealed she was going for an iron level test after feeling “lethargic”.

But Stacey, 31, has now admitted that she is still feeling shattered.

Read more: Stacey Solomon admits concerns over her health after being messaged by worried fans

Taking to Instagram last night, Stacey told her 4 million followers: “Oh God, I just fell asleep with all the boys on the sofa.

“I’ve just taken them back up to bed and I’ve got the headache from hell. Does anyone else get a headache from wearing their hair up high?”

Stacey then unpinned her hair and sighed, saying: “Oh my God, the relief. I’ve just got to let it ease its way down slowly.

“I’m going to let this mould back into shape and then I think I’m going back to bed.

Stacey had captioned her Instagram Story: “I fell asleep on the sofa with the boys. I feel like an absolute bag of poo.”

Last month, Stacey first revealed she was concerned about her health.

The mum-of-three said she was going to get her iron levels checked after her energy nose-dived.

It came after fans had begun messaging her, asking why she had been scaling back on her Instagram posts.

Stacey shared one message she had received that read: “I just wanted to drop you a little message and ask if you are ok, as you haven’t seemed yourself lately.

“You are always the first to check on everyone else. I wanted to take the time to message you.”

In response, the star said: “I love you all so much for asking.

“I know I’ve been so slow and rubbish on here but I’m ok. Just a bit lethargic and sooooo lazy.

“Going to check my iron next week and hopefully get some energy back. Love you all.”

Thankfully, Stacey appears to be feeling better today (June 5, 2021) and has been back on Instagram.

Sitting by a lake all day with the kids trying to catch fishies is my worst nightmare.

In a smiling post with her youngest son Rex, two, she said her fiancé Joe Swash was out fishing.

“He is obsessed with fishing. He always wants us to come but sitting by a lake all day with the kids trying to catch fishies is my worst nightmare!” Stacey wrote.

“So it’s me and the boys today… Hope you’re ok this morning. Happy Saturday, lots of love from me and this wavy pickle.”