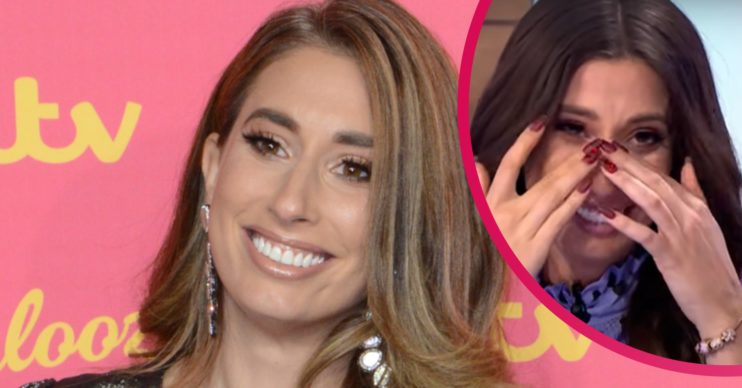 Toddler was amazed by what he saw

TV fave Stacey Solomon got a bit teary earlier today (Monday, July 20) during a trip to the shops.

The Loose Women star dropped in on Primark as her latest fashion range launched.

She was joined by a couple of members of her brood for the special expedition, including baby Rex.

And it seems Rex was amazed by what he saw when he spied his likeness on display in the shop’s window.

Stacey explained how she became emotional after making the journey to check out the new promotion for her kidswear collection.

She wrote on her Instagram Stories: “We got out nice and early now we are here and the boys can’t believe they’re in a big window.

“I might be due on but I feel really teary.”

Rex was transfixed at seeing himself as a cut out – and his mum cooed over him as he pointed at his image.

“Who’s that? It’s you!” she said to the toddler, now one, she shares with partner Joe Swash.

And Rex was also entertained by the shop’s dummies after he and Stace stepped through the looking glass.

“They let us go in the window and Rex was obsessed with the mannequins,” she laughed in another Stories upload.

Overall the visit seemed to be quite the treat for Rex, who may be suited better to modelling clothes rather than stacking them.

The mischievous tot went on to pull apart a pile of tops as he played in the store.

Stacey chuckled: “We spent a lot of time following Rex around and refolding all of the clothes!”

And it seems – despite Rex keeping her busy – that the proud mum-of-three has not ruled out having more kids.

She recently revealed Joe had to quickly shut her down after she admitted to being broody.

Stace noted on her Stories that the items in a homeware shop had her pining for a fourth child.

She also joked that Joe had “dragged her away” before she could buy anything – or “ask for another baby”.

Stacey Solomon and Joe – who got together in 2015 – are currently starring in the latest series of Celebrity Gogglebox.