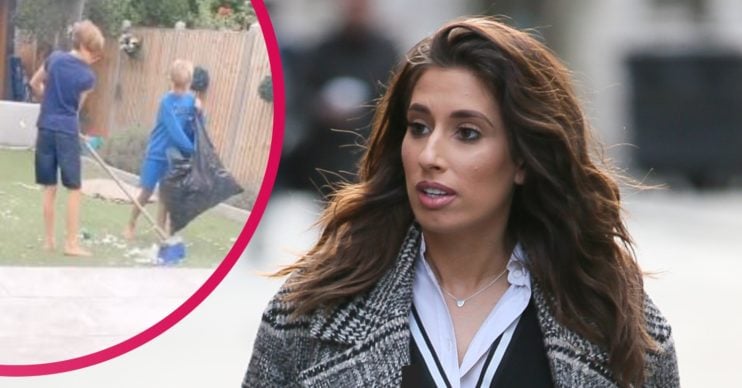 Stacey Solomon brands sons ‘buffoons’ after they mess up her garden

They had a 'war' with all her polystyrene

Stacey Solomon branded her sons “buffoons” after they trashed her normally immaculate back garden.

The Loose Women presenter, 30, forced her two eldest lads to clean up after themselves after they left broken polystyrene all over the place.

What did Stacey Solomon say about her sons?

On her Instagram Stories, Stacey refused to be a pushover mum when Leighton, eight, and Zachary, 11, left their garden littered with polystyrene after playing ‘Dungeons and Dragons’.

Late yesterday (Tuesday, August 18) evening, Stacey posted a clip of herself brushing up after her boys.

She explained, in the video’s caption: “When you think, ‘Aw the big boys are playing so nicely and being super quiet’.

“Then you look outside and they’ve had a ‘Dungeons and Dragons’ war using all the polystyrene we’ve been collecting.

“I sent them to bed when what I should have done was make them stay up all night sweeping it up.”

When you think, ‘Aw the big boys are playing so nicely’.

It appears Stacey ended up putting her foot down. This morning (Wednesday, August 19), she shared a video of Leighton and Zach clearing up outside with a brush and a bin bag – while she looked on with her feet up, sipping a brew.

Stacey wrote in the caption: “And now I’m sitting with a nice cup of tea watching these two buffoons clear up their mess.”

In the clip, she sighs with satisfaction as she says: “Watching these two buffoons do what they should have done last night.”

Speaking further, the Loose Women star laughs when she reveals her youngest, 15-month-old Rex, is copying his big brothers by mopping up.