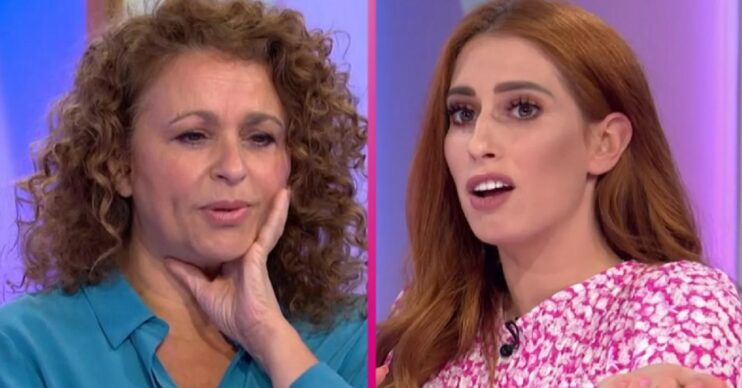 Stacey Solomon fans have rushed to defend friend Nadia Sawalha, after she was accused of spoiling her baby news.

Following her birth, Nadia took to social media to congratulate the couple on their new addition.

Nadia shared a shot of Stacey and Joe, before welcoming their daughter.

Stacey, who was pregnant in the snap, wore an all pink outfit as she beamed towards the camera.

Read more: Stacey Solomon shows off baby daughter as she admits her nipples are ‘already a mess’

“The baby girl you both longed for is in your arms! And on your birthday too Stace!!

“Thrilled to bits for you all! Can’t wait for a snuggle and a sniff of that milky neck!!!”

In addition, she shared: “Big hugs and kisses to you, your boys, and now your DAUGHTER TOO! Welcome to the world little one.”

Nadia’s post appeared to spark a reaction with her followers.

According to some, the Loose Women star shared the announcement before Stacey and Joe.

In the comments, one wrote: “Far too soon to post this in my opinion… it was within minutes that you told everybody the news… to the point that your story came before Stacey’s, so I heard it from you!!!

Stacey’s job to announce it surely!

“Not nice, especially due to the absolutely beautiful videos she showed of the birth that she has shared with everybody.”

Another said: “Wow would have been nice to hear that from her?!”

A third complained: “Stacey’s job to announce it surely.”

“Aww she’s not announced it herself yet,” a fourth commented, while a fifth added: “Happy for them but she hasn’t announced it yet.”

Replying to one comment, a fan said: “Stacey did announce it first!”

A second clarified: “She announced it on her stories 20 mins ago. No pics yet though.”

A third hit back: “If you followed Stacey you would know she announced it in her stories first.”

It comes shortly after Stacey announced that her daughter arrived into the world on her birthday (October 4).