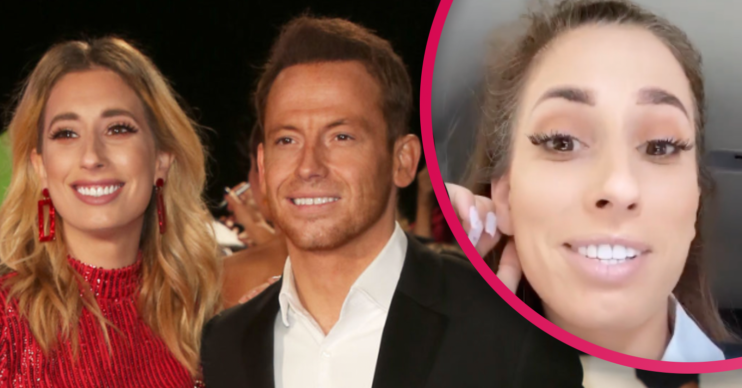 TV star Stacey Solomon apologised to fans after sharing a snap of boyfriend Joe Swash with his trousers undone.

The 30-year-old presenter posted a photo of Joe and their son Rex to her social media account, but later realised her man’s trousers were completely open.

The incident left Stacey giggling as she addressed the mistake on Instagram Stories.

Filming herself in the car, Stacey said: “Just in the car on our way out.

“I was watching back my stories and realised that the picture I took of Joe and Rex that I thought was just the cutest picture ever, Joe ain’t even got his trousers done up.”

The mum-of-three also added to the clip: “Sorry I didn’t realise.”

The snap was of Joe and baby son Rex sitting on the couch together, which Stacey completed with a love heart.

The couple were heading to Joe’s sister house for a birthday surprise at the time.

Upon arriving, Stacey admitted to being quiet as she was too busy looking after one-year-old Rex.

Alongside a picture of her sons playing in the garden, she wrote: “Sorry I’ve been so quiet.

“It’s so hard trying to visit family and social distance with a baby so I can’t do anything else other than chase them around. Hope you’re all ok.”

Stacey’s no stranger to sharing her life online.

Her latest post comes hours after the TV star took to Instagram to unveil her new pink utility room.

Despite appearing happier than ever as she posed on the tiled floor, Stacey admitted the big reveal wasn’t without some worry.

Showing off the room, Stacey wrote: “So here she is 🌸  The pink room. Hopefully now I’ll actually do my washing 😂 why am I nervous? 😂.

“I’ve Finally got some pink in our house full of boys… I know it’s not to everyone’s taste 😂 But I love it and I’m so proud of it and I had so much fun doing it – if you’re not having fun then whats it all for?

“Anyway I’m going to switch my phone off because I’m nervous for some reason 😂 I think because I did it all it feels more personal if that makes any sense 😂 . Hope you’re all ok this evening… lots and lots of love 💕.”

It’s believed the Stacey could command an estimated £14,700 per sponsored post, while partner Joe could earn up to £6,500 if they wanted to.

A spokesperson for EST1897 said: “Celebrity couple Joe Swash and Stacey Solomon are the highest-earning couple on Celebrity Gogglebox!

“Their memorable stints on I’m a Celebrity have earned them a combined following of just under 5 million who they now share family images with, featuring their newest addition Rex.