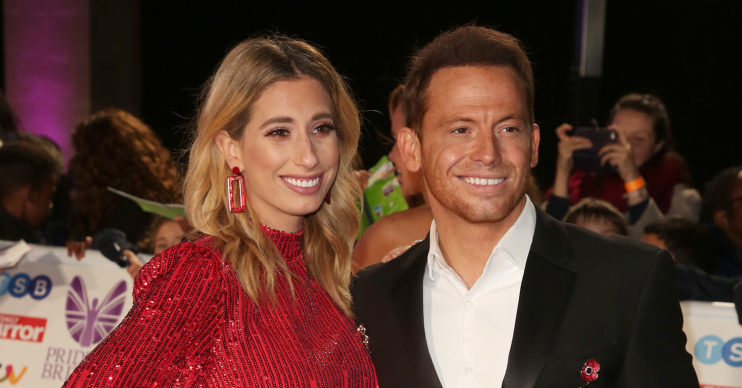 The couple originally planned to tie the knot last year

Stacey Solomon has sparked rumours that she has married Joe Swash after posting a picture in which Joe can be seen wearing a wedding ring.

Joe and Stacey, who have been together since 2016 and share two children, were set to marry last summer before Stacey became pregnant.

Joe and Stacey sent their fans into a frenzy simply with an Instagram story last night (Sunday, January 30).

The pair have sparked rumours that they have married in secret!

They were originally set to marry last summer. However, Stacey’s pregnancy with their daughter, Rose, put a halt to those plans.

However, from clues given by Stacey’s latest Instagram story, could the couple have already tied the knot in secret?

Stacey took to Instagram yesterday to thank her five million followers for their “overwhelming” reaction to her latest clothing collection.

“You give me the confidence to go for these things and make them happen,” she captioned the story.

“I wouldn’t even have the chance to have a collection without your support. And I don’t take that for granted and will never forget it.”

Whilst Stacey’s words will have warmed the hearts of many, they won’t be what gets her five million followers talking.

Eagle-eyed fans will spot something slightly different about Joe’s hand in the story Stacey uploaded – or to be more specific, one of his fingers.

In the story, Stacey can be seen cradling a cup of coffee in her living room.

Joe’s hand can be seen resting his left hand on the Loose Women star’s thigh.

On Joe’s finger, a gold wedding band can be seen!

Could the couple have finally tied the knot? And did Stacey slip up by posting a picture of Joe’s wedding ring? Or was it a way of subtle way of announcing that they’re already married? It all remains to be seen.

ED! has contacted reps for Stacey and Joe for comment.

Joe and Stacey originally planned to marry in the summer of 2021.

However, when Stacey found out that she was pregnant with baby Rose, their plans were delayed.

They then planned to marry in July of this year, when Rose is old enough to be a flower girl.

The couple spoke about their plans during an appearance on the Loose Women Christmas special.

“We would love… if all goes well – because Covid’s still massive and you never know what’s around the corner – but we would love to get married in July next year, we really would,” Stacey said at the time.

“It will be so nice to have the boys and Rose there.”

Stacey is mother to three boys, as well as Rose. Her eldest two children are from previous relationships.