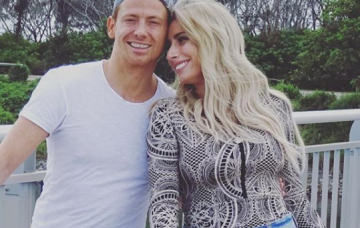 Inside their new Essex home

Stacey Solomon and Joe Swash have shared the first picture from their new home after moving in together ahead of his trip to Australia.

HOME SWEET HOME. Finally all in and ready to start a fresh together. If you’re wondering what’s going on here… we are eating a Chinese out of random Christmas dishes, using our hands, whilst sat on washing baskets and cardboard boxes eating off of a cat basket 😂😂😂 Nothig to see here… 🏡 🏡 🏡 🏡 🏡 🏡

Loose Women panellist Stacey, 26, posted an adorable snap to Instagram from inside the new family setup, writing, “HOME SWEET HOME. Finally all in and ready to start a fresh together.”

Referring to their dinner, she added: “If you’re wondering what’s going on here… we are eating a Chinese out of random Christmas dishes, using our hands, whilst sat on washing baskets and cardboard boxes eating off of a cat basket. Nothig [SIC] to see here…”

Joe, who is due to fly out to Australia to film I’m a Celebrity… Get Me Out of Here! spin off, Extra Camp any day now, is seen leaning against a wall, while Stacey and her two sons Zachary, ten, and Leighton, six, sit on the assortment of makeshift chairs.

Happy birthday to me 😬 yaaay. Was imagining being surrounded by thousands of pink balloons when I woke up on a four poster bed but I’m actually sooo much happier to be waking up on a mattress on the floor surrounded by brown boxes because we are about to move in together and blend our lives together which is the best birthday present I could have ever wished for. 🎁💛😍

Joe also shared the picture on his own Instagram account, adding “It was moving day for us! We are now in our home.”

The happy news comes just days after Joe confirmed he will be heading Down Under to film Extra Camp once again alongside Scarlett Moffatt and Joel Dommett, marking the end of an eventful week for the former EastEnders star.

So good to see my jungle family again.. @scarlettmoffatt is like the sister I never had and @realjoeswashy is nothing like the brother I already have. Plus I left a 2p coin under a log on set. Can’t wait to see if it’s still there.

Joe, 36, revealed earlier this week that he had his car broken into during a day out with his 11-year-old son, Harry, with thieves making off with his passport, Harry’s school bag and Joe’s entire I’m a Celebrity! wardrobe.

Writing alongside a picture of a mammoth ASOS delivery, the presenter wrote on Instagram, “If there are a gang of boys hanging around the #Edmonton area dressed in some funky looking shirts let me know!!! The sods nicked my jungle wardrobe from the back of my car as well.”

Still, the couple clearly have plenty to celebrate now they’ve moved in together at last!

Of course, everyone will now be wondering whether wedding bells will follow…

In a recent chat with New! magazine, Stacey said: “We’re moving in together and probably want to have children before we get married. And when we’ve got through life and fed our children and they’re independent, that’s when I would think, ‘Should we get married?'”

Heading back Down Under will undoubtedly stir up some happy memories for Joe, who met Stacey during her 2010 appearance on the popular reality TV series (which she went on to win), while he was busy presenting the spin off show.

However, it wasn’t until 2016 that the pair struck up a romantic relationship.

Are you looking forward to the new series of I’m A Celeb starting? Leave us a comment on our Facebook page @EntertainmentDailyFix and let us know what you think!