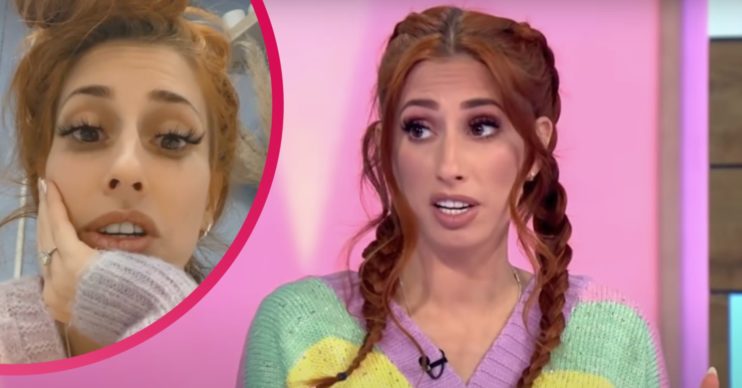 The star is getting her iron levels checked after feeling 'lethargic'

Stacey Solomon has told fans that she fears for her health after her energy levels took a nose dive.

The Loose Women star, 31, opened up after many of her Instagram followers noticed she had been quiet on the social media site.

Stacey is usually a prolific poster, but has not shared as many videos as usual in recent days.

Addressing their questions, the mum-of-three admitted she has not been feeling herself.

Stacey has even booked a doctor’s appointment in order to get her iron levels checked.

In a new video, filmed from her downstairs loo, Stacey said: “I’ve been sitting on the toilet reading all your messages.”

She then posted one she had received that read: “I just wanted to drop you a little message and ask if you are ok, as you haven’t seemed yourself lately.”

The message continued: “You are always the first to check on everyone else. I wanted to take the time to message you.”

As Stacey was then interrupted by her son Rex, who turns two this weekend, she finished her video with a written caption.

It said: “I love you all so much for asking.

“I know I’ve been so slow and rubbish on here but I’m ok. Just a bit lethargic and sooooo lazy.

“Going to check my iron next week and hopefully get some energy back. Love you all.”

Hours later, Stacey checked in again before heading to bed with an adorable clip of herself and Rex.

“Goodnight, sweet dreams,” she said. “I hope you are ok.”

Stacey then shared a quote from the author A.A. Milne, who wrote Winnie-The-Pooh.

It says: “Always remember, you’re braver than you believe, stronger than you seem, smarter than you think and more loved than you will ever know.”

Stacey has had her hands seriously full in recent months, in both her personal and professional life.

Along with her job on Loose Women, she has been working hard to build up her own brand.

In March, Stacey released her first crafting book, called Tap To Tidy. Weeks later, she hosted her own BBC show, called Sort Your Life Out.

This month, Stacey’s latest clothing collection with In The Style reportedly made £1.4 million in just 14 days.

Away from work, she is also a busy mum and has been planning her upcoming wedding to fiancé Joe Swash.

The couple have moved into a new house in Essex that they are slowly refurbishing.

Called Pickle Cottage, Stacey and Joe have decided to hold their wedding in the grounds of their new property.

No wonder the poor lady is feeling so exhausted…