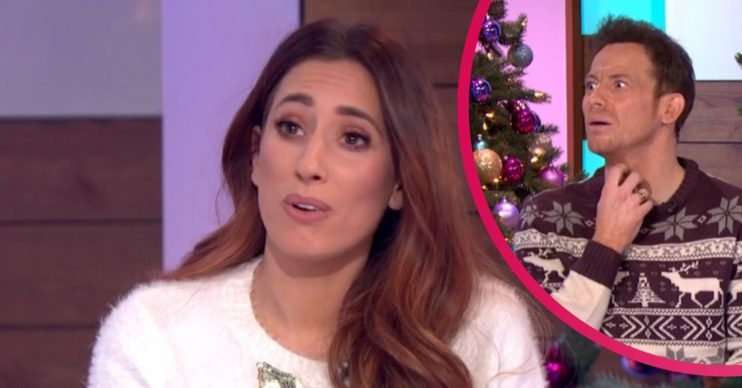 The couple were on today’s (Wednesday, December 9) episode of Loose Women alongside presenters Eamonn Holmes and Ruth Langsford.

Before coming on the show, Stace took to her Instagram Stories to reveal Joe wasn’t very happy about what he had to wear.

What did Stacey Solomon say about their Christmas jumpers?

“It’s only Christmas jumper day on Loose Women and Joe’s fuming,” she told her followers on Instagram.

Joe sat behind her in the shot, looking grumpy in a brown and white jumper.

Stacey chuckled as she added: “Nice jumper! It’s better than the V-neck.”

She wrote in the caption: “Joe bought all his favourite V-neck T-shirts to wear on Loose Women today, only to find out his worst nightmares have come true…”

What happened on today’s Loose Women?

Elsewhere on the show today, Eamonn and Joe clashed with their other halves as they discussed how the stresses of the festive period are notorious for causing arguments among couples.

They talked about how neither Ruth nor Stacey like to let their partners have a say in what the Christmas tree looks like, with both women taking over decorating duties in their households.

Read more: Stacey Solomon in hysterics after troll calls her a ‘cheapskate’

Joe moaned: “It’s not our tree… let’s get this straight, I didn’t even know the tree had arrived, I didn’t know what tree we were getting.

“And then when it does arrive, I say, ‘Let’s all sit down and do the tree together…’

“We did!” Stacey argued, but Joe insisted he didn’t get a look in, as he said: “That’s Stacey’s tree.”

Eamonn agreed, as he turned to Ruth and made the same accusation, adding: “You’re like the Grinch that stole Christmas!”