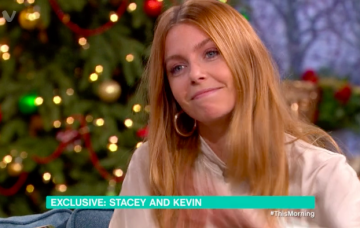 The Glitterball victor almost walked away

Stacey Dooley could have missed her chance at winning Strictly Come Dancing, after confessing she considered walking out of the show in the early stages.

After a shaky start to the BBC show, the presenter admitted she didn’t want to continue after week two because she felt like a “plonker”!

Stacey and Kevin, 36, admitted they then upped their training hours to 14 hours a day, but were still shocked when things turned around.

The BBC3 documentary presenter said taking home the Glitterball trophy was a genuine shock, admitting: “I think we’d kind-of accepted that we weren’t going to win.”

She and Kevin thought runner-up Joe Sugg was a sure-thing to take the crown, with Stacey adding: “I know it’s ridiculous to say because everybody always says it – ‘Oh I never though it’d be me!’ and they play it really earnest, but I REALLY truly didn’t. And there were so many brilliant dancers – I thought, I didn’t want to look like a total idiot.”

The TV star also laughed off the moment she flashed her underwear during the final, saying: “It’s no real surprise. They were big Bridget Jones knickers too.”

Viewers loved the chat, flocking to Twitter to praise the dancing pair.

One wrote: “Love you @StaceyDooley deliciously happy that you and Kevin the ‘gent’ got to hold the Trophy, you are the genuine article. A real gem of a lady and I admire your honesty ❤️.”

Another added: “@StaceyDooley really enjoyed you and King Kev talking to Ruth and Eamonn this morning. Nearly spat me All Bran out when you were talking about over excitable skirt swishing, big knickers & flashing your ‘area’. You are so humble & down to earth. 🕺💃👏.”

A third commented: “So wanted you both to win. You were an amazing couple, down to earth, with rapport. Stacey, you were the partner Kevin needed to get the Strictly trophy. Kevin you have grown, matured & developed into an amazing dancer & choreographer but also a great person ❤️.”

We can’t wait to see Stacey on the Strictly tour!

What did you think of Stacey and Kevin’s chat? Leave us a comment on our Facebook page @EntertainmentDailyFix and let us know what you think.