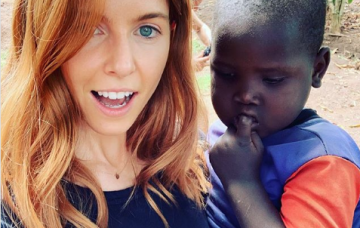 Strictly Come Dancing winner Stacey Dooley has been criticised for promoting “tired and unhelpful stereotypes” while filming for a Comic Relief documentary in Uganda.

The 31-year-old came under fire from MP David Lammy on Twitter followings accusations she displayed traits of having a ‘white saviour complex’ in images from her trip to Africa shared on her Instagram account.

The pictures show Stacey posing with young children in her arms and her filming with a crew for the TV charity appeal, which has been frequently accused of projecting a distorted representation of Africa to boost efforts.

“The world does not need any more white saviours,” the politician tweeted in response to an article highlighting fan disapproval of Stacey’s approach.

“As I’ve said before, this just perpetuates tired and unhelpful stereotypes.

“Let’s instead promote voices from across the continent of Africa and have serious debate.”

He later added, tweeting at Stacey: “This isn’t personal and I don’t question your good motives.

“My problem with British celebrities being flown out by Comic Relief to make these films is that it sends a distorted image of Africa which perpetuates an old idea from the colonial era.”

Stacey, whose documentary is believed to focus on malaria and neo-natal clinics, replied: “Is the issue with me being white? (Genuine question) …because if that’s the case, you could always go over there and try raise awareness [sic]?

“I saw projects that were saving lives with the money. Kids lives.”

Among the flurry of social media users giving their opinions, Corrie actress Nicola Thorp also inserted herself into the row by responding to Stacey wondering about whether the issue was because she is white.

“I just don’t get how an investigative journalist just doesn’t get this,” the disbelieving soap star told her 34,000 Twitter followers.

Africa. It’s been a while ❤️

Stacey’s Instagram posts have been flooded with comments from fans on both side of the row.

“It’s not a matter of her not meaning anything malicious,” reasoned one after many fans leapt to her defence.

“At the end of the day, this photo perpetuates a distasteful image of black people and Africa that we do not appreciate.”

Another added: “All a white woman has to do is pick up an African child and she is suddenly the darling of social media, regardless of her intentions on the continent.”

But another commenter felt Stacey was in a no-win situation.

And on a clip of a woman dancing, ex Strictly partner Kevin Clifton commented: “Look at you teaching the world to dance with your new skills.”

It was reported last year that Comic Relief would halt the use of sending famous faces to front emotive appeals after an aid watchdog described it as “poverty tourism”.

CEO Liz Warner told The Guardian the organisation had taken its “first steps” towards change and Africans would be able to represent themselves, rather than having their stories told by celebs.

Comic Relief is believed to have raised over £1billion for charities in the UK and abroad over the last 30 years.