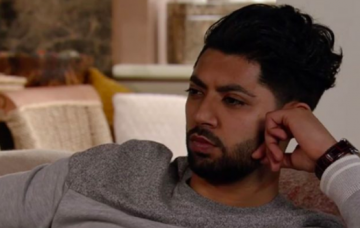 He leaps in to defend his wife but will his bravery have devastating consequences?

It looks like Zeedan Nazir’s temper could land him in huge trouble in Coronation Street next week when he leaps to Rana’s defence and knocks a stranger unconscious.

Rana and girlfriend Kate Connor go out in town drinking as Kate wants something to take her mind off of her tragic brother Aidan’s suicide.

But things turn nasty for the girls when a group of lads tried to join them and Kate told them to do one.

Not happy with how Kate spoke to them, the ring leader Phil squares up to the waitress but Sophie Webster – who was also out with them – sets off her rape alarm and sends the lads running.

Unknown to Kate and Rana, Phil follows them back to the cobbles and – as the girls celebrate Rana telling Zeedan she wants a divorce – he makes his move and attacks Kate.

Zeedan hears Rana scream and comes running into the ginnel.

He punches Phil, knocking him out cold.

But as the thug lies motionless on the floor, has Zeedan accidentally killed him?

Actor Qasim Akthar who plays Zeedan quit his role as the boss of Speed Dahl earlier this year so could this incident be the start of his exit story?

At the time his departure was announced a source told The Sun: “Qasim has been really popular among the cast and viewers but has decided he wants to do other things in the short term.

“He was a successful actor before he came onto Corrie so is looking forward to having another crack at something new. It was entirely his decision to leave.”

A Corrie spokeswoman said: “Qasim is a talented actor who has been involved in some great storylines.”

Will you miss Zeedan? Leave us a comment on our Facebook page @EntertainmentDailyFix and let us know what you think!

Coronation Street airs Mondays, Wednesdays and Fridays at 7.30pm and 8.30pm on ITV