But what is she here for?

It was no secret that Tamzin Outhwaite was heading back to Albert Square as Melanie Owen but no one was actually expecting her back as soon as tonight!

Read more: Devastation for the Brannings as Abi’s life support is switched off

Jaws dropped across the country as the blonde headed into the Arches, only to be told by Ben that he wouldn’t be able to fit her in for a service.

“Nice to be back,” Mel replied, before fixing Ben with a very intense stare.

Nice to have Mel back. Shouldn’t have killed Steve Owen off. One of the best characters ever. #EastEnders

Ohhhhhh Here she is ……. Mel is back !! #EastEnders

Ben, who was only a toddler during Mel’s first stint in the Square, is oblivious to the fact that she is clearly mixed up in the whole heist/missing money saga.

You know, the money he’s hiding in a suitcase under his desk, while Aidan Maguire gets more dangerously deranged by the minute.

Ben was revealed as the thief during last night’s episode and tonight, he revealed to Jay – who caught him with a handful of fifties – how he pulled his own mini-heist off. 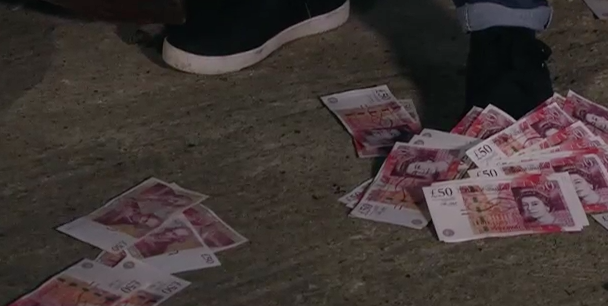 “Dad’s been acting weird for ages, it’s obvious something was going on,” Ben revealed. “And remember the day Maguire marched into the funeral parlour like he owned the place? I thought, put myself in Billy’s shoes, what’s a nice quiet place to hide something?”

“There’s nothing much quieter than a coffin is there?” an incredulous Jay replied, before realising that Ben had stolen his keys to get into the funeral home.

“If it hadn’t been me it would’ve been one of them, they’re a bunch of snakes, Jay,” Ben explained, before telling Jay that he planned on giving the money to his dad once everything had died down.

How very odd considering he was then trying to book himself a one-way ticket on a ferry and handing Kathy expensive jewellery for no reason.

Is Ben really planning on just hot-footing it of Walford and leaving his dad, his newly-found mum and his ‘bruv’ – without even telling them?

Even if he is it doesn’t look like he’s going to make it now Mel’s back and has obviously been watching him.

Has Ben bitten off more than he can chew?

Read more: There’s a hot new romance on the cards in EastEnders between a very unlikely couple

Was giving Kathy that necklace a BIG MISTAKE? And just what has Mel got to do with all the money and Ciara Maguire?

All will become clear on Thursday when Mel spots Kathy wearing the necklace and works out that Ben has got the missing loot.

As we know, Harry Reid is off-ski from EE in the near future, will Melanie have something to do with his exit?