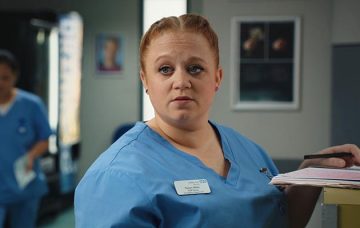 Will it be happily ever after?

It’s been a rocky road to the altar for Casualty lovebirds Glen Thomas and Robyn Miller, and the drama isn’t over yet for the unlucky pair.

In this week’s episode of the medical drama, which airs on Saturday 24 March, they are set to marry. Which should be the happiest day of their lives.

Especially as their first attempt ended with Glen leaving her waiting at the church.

It’s a small, simple ceremony with Charlie, Duffy and baby daughter Charlotte in attendance.. But disaster strikes when Glen suffers a seizure while getting ready for the big event.

Fearing his brain tumour is back, Glen confides in Dr Dylan Keogh who runs a series of tests and has horrible news for the groom-to-be… His brain tumour has spread and Dylan wants to admit him immediately.

Glen, however, has other plans – he’ll attend his wedding even if it’s the last thing he does…

And when he suffers another seizure at the service, will he be able to hide it from his bride?

Oh, we so wanted it to be happy ever after for the likeable pair!

Elsewhere, doctor Elle Gardner begs Alicia for a morning-after-pill prescription (naughty, naughty!), and Gem and Rash continue to make doe-eyes at each other – it’s just TOO cute.

And they are not the only ones feeling frisky, paramedics Iain and Sam seem to be growing closer by the day, too!

Watch the drama unfold on Saturday 24 March at 8.20pm on BBC One.