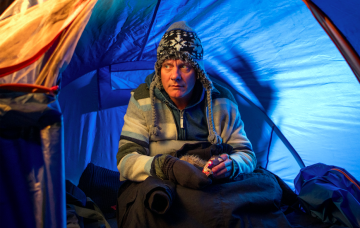 Sean Tully finds himself out in the cold in Coronation Street next week after he double-crosses his good samaritan Liz McDonald.

Liz has been kindly letting down-on-his-luck Sean kip on her sofa after being thrown out by Fiz Stape.

But when unemployed Sean swoops in to take her shifts at The Rovers, she’s furious with him and slings him out too.

With no money and nowhere to go Sean is forced to take desperate measures.

Things are actually looking up for Sean as the week kicks off when Liz offers him her sofa.

But his loyalty to Liz is soon forgotten when Toyah offers him Liz’s old shifts behind the bar at The Rovers.

Liz was fired after telling her married lover Johnny Connor that his granddaughter Susie was being neglected by Eva, prompting a visit from social services.

When a shamefaced Liz grovels to Toyah for her job back, she’s stunned to learn that Sean has already taken her shifts.

Livid with Sean for being so duplicitous she tells him to find somewhere else to stay. Meanwhile Fiz reminds Sean that he still owes her two weeks’ rent.

After calling round everyone he knows with no luck, Sean spots the tent outside the shop and prepares to spend his first night sleeping rough.

After hearing that Liz has kicked him out, Fiz wonders where Sean has spent the night. Meanwhile, Sean wakes up cold and scared after spending the night in the tent.

Earlier this week it was revealed that Sean would be caught up in a violent drama when he makes a friend on the streets who is brutally attacked.

Paparazzi pictures that were taken last month revealed Sean being attacked in a public toilet, but it turns out that there is yet more trouble heading his way.

There have been new pictures taken during on-location filming that show Sean face trouble with his new friend Carol.

It has been hinted that Sean is desperate to persuade his friend against prostitution, but his attempts are fruitless when she gets into a stranger’s car.

Sean is then horrified when she returns later, bloodied and bruised after being attacked by the customer.

The paparazzi pictures show Sean cradling Carol’s lifeless body in his arms, with her face covered in blood.

There is a race against time for Sean to get Carol the help she needs. But will he manage to save his friend?

Thankfully it looks like Sean’s ex Billy Mayhew might be the pair’s night in shining armour when he comes to their aid.

But will the reformed vicar be the one to persuade Sean off the streets and back to Weatherfield?

These scenes will air on Coronation Street later this year.

What do you make of Sean’s upcoming homeless storyline? Leave us a comment on our Facebook page @EntertainmentDailyFix and let us know what you think!