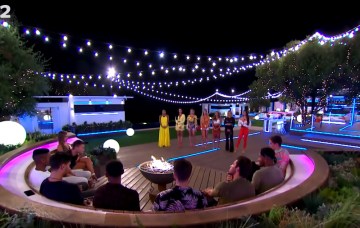 They wrestle with their emotions

There’s chaos in the Love Island villa on Thursday night when news of another recoupling is announced.

The episode first sees Georgia Steel and Sam Bird face the consequences of their recent actions where they decided to split to get keep their places in the villa.

Earlier this week, the love birds broke up after they were forced to either split up and become single, or leave the villa as a couple.

Tonight, the islanders receive a text which reads: “Islanders, tonight there will be a recoupling. Georgia and Sam will pick first. The remaining boys will then choose who they want to couple up with #freshstart #bagabae.”

Although the couple have been trying to get to know other islanders, the pair are struggling to move on from each other.

Speaking in the Beach Hut, Georgia reveals: “It’s really hard knowing that Sam will be sharing a bed with another girl.

“I really didn’t think it would be like this. It’s the hardest test I’ve ever gone through, ever in my life.”

Talking in the Beach Hut, Sam hints he regrets making the decision to split from Georgia for the sake of staying in the villa.

He admits: “I don’t think Georgia fully understood what is about to happen. This is recoupling.

“It’s all well and good splitting up and being single and talking to other people but if the people we’ve been talking to is nothing like what we had, then what are we doing?”

Preparing herself for the decision she’s about to make, Georgia says in the Beach Hut: “I’m really nervous for recoupling. It’s the first recoupling that I haven’t felt excitement. The boy I want to pick, I can’t pick. Awful.”

Meanwhile, Georgia and Sam aren’t the only islanders being affected by the recoupling.

New boy Paul Knops is thrown straight into the centre of the drama as he faces a big decision between Alexandra Cane and Laura Anderson.

Opening up about his feelings towards Alexandra, Paul says in the Beach Hut: “We are attracted to each other, it’s difficult because I’ve got Laura… I am interested in her. If I had to choose between one of them at this very moment…I don’t know.”

With the recoupling just hours away, Paul admits to Wes Nelson and Josh Mair that he can’t decide on the girl he wants.

He says: “I don’t think anyone can call it. The decision if I do make, it then has to go with I’ve made that decision and then I want to go with it and I really want to get to know them. This decision tonight needs to be final.”

“The more I talk to Laura, the more I like her. But I speak to Alexandra and she is a typical type for me. It’s just an interesting one, I think to the last second I’m still not going to be able to make my choice.”

Who is your favourite Love Island couple? Leave us a comment on our Facebook page @EntertainmentDailyFix and let us know what you think!