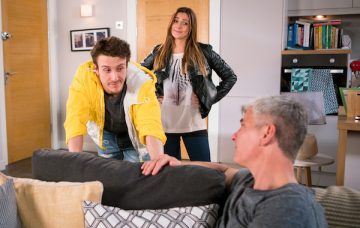 Michelle's sons clash before the wedding leaving her stressed

Ali Neeson’s nose is put seriously out of joint in Coronation Street next week when Michelle’s other son Ryan Connor returns from Ibiza for the wedding.

She was reunited with Ali recently when he began working as a junior doctor at the medical centre, but their relationship remains strained.

Him having a sexual relationship with Michelle’s best friend Carla didn’t help things along either.

They’ve been making headway since Aidan Connor tragically killed himself though, with Ali offering to help Michelle rearrange her wedding for a smaller ceremony.

Next week Michelle tells Ali that Ryan will be returning to Weatherfield for the wedding and Ali promises he won’t make a scene.

But he’s left feeling annoyed when Michelle dumps him in favour of picking a drunk Ryan up from the airport.

When Ryan arrives on the cobbles he gets under Ali’s skin even more when he offers to organise Robert Preston’s stag party after the best man cancels.

Michelle asks Ryan to keep an eye on Robert, who has already had a health scare that week, and make sure he doesn’t drink too much.

But at the stag party, Ali is forced to intervene when he clocks Ryan trying to ply Robert with alcohol.

Will the boys ever see eye to eye or is them both being at the wedding a disaster waiting to happen?