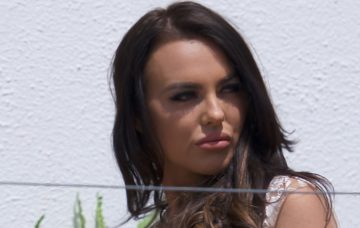 Love Island’s Rosie Williams has tried to get revenge on dumped ex Adam Collard by posing in sexy lingerie.

He also refuses to apologise for his behaviour.

In Wednesday night’s episode Rosie, 26, is still reeling from 22-year-old Adam’s shock decision to crack on with newcomer Zara McDermott, 21, despite being coupled up with Rosie.

Rosie had tearfully poured her heart out to Adam on Tuesday’s episode, only for Adam to smirk in response.

So she tries a different tactic on Wednesday, putting on her sexiest lingerie for a photoshoot in the garden with Megan Barton Hanson.

Rosie explains: “Normally if a boy [bleeps] me off I would get smoking photos and post them all over social media to show him what he’s missing, but I’m just going to do it in front of his face.”

She adds: “We’re women, if we want to take a photo of our gorgeous bodies, we will do.”

Unfortunately for Rosie, her revenge plan doesn’t really work, as Adam tells the islanders he’s not attracted to the sight of her posing in lingerie.

Adam adds in the Beach Hut: “If that was some sort of ‘hail Mary’ to try and draw my eyes back to her, it’s not really going to work. That sort of stuff does not pull my attention at all.”

The gym owner is now free to crack on with his attempt to get to know Zara, who arrived at the villa on Sunday night.

He admits on Wednesday night that although he didn’t like watching Rosie cry, he doesn’t feel he has anything to say sorry for.

Adam tells Zara: “I’m done with her. Obviously it’s not nice to see a girl cry, whoever it is about anything. I’m not going to apologise when someone speaks to me like that anyway.”

He also claims it was Rosie who broke their coupling with her behaviour, not Zara.

“Whether or not I fancy Zara, that’s not the point,” says Adam. “The point is the way she spoke to me and the way she’s acted, and the insecure behaviour. That’s what pushed me away.”

Adam was initially coupled up with Kendall Rae Knight in the villa, before ditching Kendall when Rosie arrived.

So perhaps it’s no surprise that viewers tonight will also see Rosie warning Zara that Adam may dump her next if another girl arrives.

Rosie was in tears last night when it became apparent Adam was choosing Zara over her; she was particularly upset as just a couple of nights earlier she’d been intimate with Adam in bed, which she only did as she thought they had a future.

Should Adam apologise to Rosie? Do you think Adam and Zara make a good pairing? Leave us a comment on our Facebook page @EntertainmentDailyFix and let us know what you think!