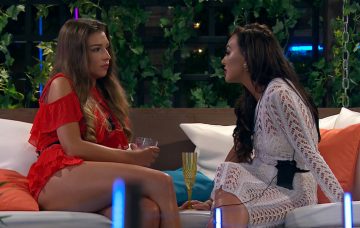 Love Island’s Rosie Williams has warned newcomer Zara McDermott that Adam Collard could dump her when a new girl arrives at the villa.

Zara, 21, has made no secret of the fact she fancies Adam, 22, who is single after being dumped by Rosie, 26, on Tuesday night.

On Wednesday night, Rosie decides to chat with Zara, figuring that the newcomer simply may not have known what was happening between Rosie and Adam.

Rosie wants to clarify to Zara why she’s been so upset by the whole situation, and warn Zara not to make the same mistake she did.

She tells Zara: “I don’t think you know half, about me and Adam. Obviously we’ve spent ten days together, we’ve spoken about us as a couple in this villa.

“We have done stuff in bed together because that’s how close we’ve got.”

Rosie goes on to say she doesn’t think either Zara or Adam handled the situation well, as neither of them spoke to Rosie about their feelings.

She warns Zara: “You’ve just got to give me a chance babe and I’ve got to give you a chance. But you’re the fourth girl in two weeks that he’s tried to crack on with, this isn’t a coincidence it’s a pattern.

“I’m done with him. But I will say to you be careful. Because I’m not the first girl, I’m the second girl. Megan was the third, you’re the fourth and it’s been two weeks. Be careful.”

Zara decides to approach Adam and recount the situation, as it seems alarm bells are ringing about whether Adam will ditch her when someone else arrives.

Adam, however, assures Zara she is “my type” and he wants to see what happens with her.

He also insists Rosie pushed him away because of her behaviour, and he doesn’t think he’s done anything wrong.

“I’m done with her,” says Adam. “Obviously it’s not nice to see a girl cry, whoever it is about anything. I’m not going to apologise when someone speaks to me like that anyway.

“Whether or not I fancy Zara, that’s not the point. The point is the way she spoke to me and the way she’s acted, and the insecure behaviour. That’s what pushed me away.”

Should Zara be worried about Adam? Leave us a comment on our Facebook page @EntertainmentDailyFix and let us know what you think!