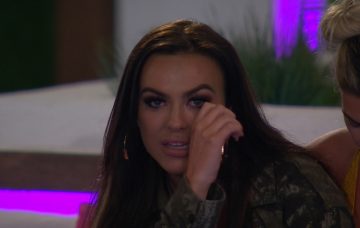 She's been left hurt and embarrassed by events

Dumped Love Islander Rosie Williams has spoken out after being humiliated by Adam Collard during her time on the reality hit.

Read more: Is Laura about to QUIT after Megan and Wes humiliation?!

Fans of the show will recall that the 26-year-old from South Wales arrived on day four and immediately caught the eye of gym owner Adam, 22, which led him to dump Kendall Rae Knight, 26, and couple up with Rosie instead.

Unfortunately, Rosie and Adam’s pairing crumbled when Zara McDermott, 21, rocked up and Adam switched his affections from Rosie to Zara.

It led to a devastated and tearful Rosie pouring her heart out to Adam, saying she felt embarrassed and hurt, particularly as they’d been intimate in bed just days earlier.

Sadly for her, it also spelled the end of her time at the villa, as she left during a recoupling when new boy Sam Bird chose to pair with the only other single girl, Samira Mighty.

ED! and other media caught up with Rosie to chat about Adam, regrets and which couples aren’t going to make in the long run…

How do you feel about being out?

“I’m absolutely gutted, to be honest. I don’t feel my journey was ready to come to an end. I went in there to find love and I didn’t find it, and then some people are in there not to find love and are still there. It doesn’t feel fair, but I am where I am.”

Who should have been dumped instead of you?

“I think Adam should be here! Why should he get to stay in and rack up his numbers of women and I have to leave when I followed my heart? That’s not fair.”

Would your Love Island journey have been different if you’d not coupled with Adam?

“I definitely think I would have had a different journey. I may have still been in there and found someone who wanted something long-lasting with me. But I can’t say I would do it any differently, regardless of what happened.”

Did you fancy any of the other boys?

“I thought Charlie (Frederick) was good looking and it was a bit of a shame he left when he did as that could have blossomed into something. Eyal (Booker) is absolutely beautiful, but so is my Megan (Barton Hanson) and I’m very happy for those two. Out of everybody in the villa it was Charlie and Eyal who I fancied.”

How would you describe Adam’s behaviour towards you?

“I wouldn’t personally label it as emotional abuse. I’m a woman and I dealt with what I had in front of me and I think I dealt with it quite well. I think Adam is 22 and a lot of people forget that because of the way he looks and possibly the way he behaves. I think he’s a guy who hasn’t had a lot of serious relationships and doesn’t know how to deal with them. I think he has a lot of learning to do.”

Do you regret getting intimate with Adam?

“I don’t regret anything. I genuinely believed what Adam and I had was for real or I wouldn’t have done what I did with him. I’m a 26-year-old woman and I liked somebody and it felt right at the time. For me to do something like that with someone means they meant something. It’s just a shame, obviously, that it was over 24 hours after, or however long it was. But I don’t regret anything I do. I was following my heart the whole time.”

How would you describe your relationship with Adam in the villa?

“I’m not sure whether our relationship was portrayed as strong as it was. In the villa everyone thought we were the strongest couple in there. We were always together and talking, finding out stuff about each other and talking about the future. So it was a shock when he suddenly jumped to Zara. I just think Adam can’t help himself and when someone new comes in and he hasn’t got them, he needs to get them. I think it’s sad and people like that will never be fully happy.”

Do you think he’ll do the same thing to Zara?

“I do think he’ll go on to do the same thing to Zara. I did actually say to Zara that four girls in two weeks is a pattern, not a coincidence. I hope for her sake he doesn’t as I wouldn’t want any of the girls going through what I went through. Who knows. Only time will tell in that villa. You can’t play a game and can’t pretend to be anything as it will show.”

Are Adam and Zara genuine?

“I don’t think I could ever trust Adam to be genuine. I thought he was genuine as he’d said things to me about our future, meeting each other’s parents and having a relationship outside the villa. And, yes, he is very convincing otherwise I wouldn’t have fallen for it. We shall see. Only time will tell. When the next girl comes in we’ll see what happens!”

What sort of islander do you want in next?

“I want another brunette girl to go in next and see what Adam does! I think Adam’s had it easy and has everyone thinking he’s not too bad. I want to test the water a bit more, chuck another brunette in!”

Who do you think is the weakest couple?

“I would say Sam and Samira at the minute. I was speaking to Samira and I know Sam isn’t actually her type and she was disappointed when he walked in. And they don’t know a lot about each other. I hope for Samira’s sake they can give it a chance and find something in there as she hasn’t had anything.”

What do you think about Ellie and Alex’s coupling?

“That’s a difficult one. I hope for Alex’s sake it’s for real but I have had a chat with him and they overthink a lot, them two, and I think when it comes to relationships it should be natural. You shouldn’t think, ‘Oh, am I touching her a certain way or speaking to her a certain way.’ You should go with the flow. I hope they can chill out a bit and just enjoy each other’s company.”

Do you think any of the couples are fake?

“I’ve always had my ups and downs about Wes and Laura. I think Laura is genuinely into Wes and cares about him and is looking for someone who could possibly be her husband. But Laura’s my friend and obviously shares her concerns with me, which is why Adam and I voted Wes and Laura as being the least compatible couple as we do believe their real test will be when they leave the villa and Wes gets a lot of female attention. I hope for Laura’s sake it’s genuine. And I love Wes, he’s so funny. It’s a massive test for any couple in the villa and we’re not naive to the fact there is a test when you come back as life is never the same again.”

Who deserves to win?

“Jack and Dani! I love them. When I’ve not been in a couple with Adam I’ve been their third wheel and they’ve looked after me loads. I’ve joked it will continue outside the villa and I’ll be at the end of their dinner table watching them eat!”

Do you think Jack and Dani will have sex in the villa?

“I don’t think they will. I think Dani’s father [EastEnders actor Danny Dyer] is in the public eye and she is very aware of that and has a lot of respect for her dad. I genuinely believe she won’t do it. There’s a lot more pressure on Dani, bless her, and she’s handling it well.”

Don’t miss out: Three steps to ensure you see all ED!’s latest news on Facebo

How will Jack get on when he meets Danny Dyer for the first time?

“Jack is so funny and you can’t help but love him. He’s treated Dani amazingly in the villa and her dad will see that. I think they’ll have a little love for him before he gets out, to be honest.”

Would you go back into the villa?

“Definitely! I’ve already said to them I’d go back in! If Adam makes it to the end and they want me to go back in and give him a telling off I will! I’ve had an amazing experience and enjoyed every second of it. If they wanted me back in I’d be on the next plane.”

Love Island continues at 9pm each night on ITV2.

Were you disappointed to see Rosie go? Leave us a comment on our Facebook page @EntertainmentDailyFix and let us know what you think!