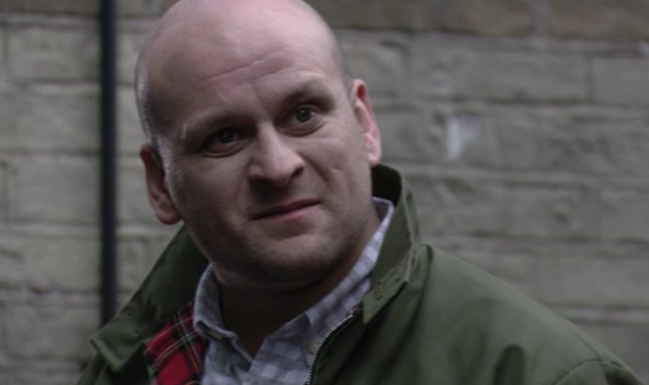 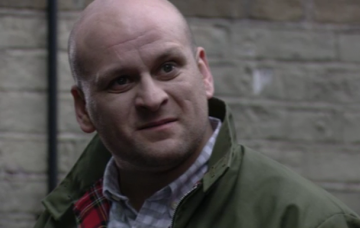 Just who is this guy?

Mick Carter is proper fuming next week when he hears that his so-called mate Stuart Highway has threatened his beloved wife Linda in The Vic cellar.

As the week kicks off Stuart is still in disgrace but he meets with brother Halfway who then turns up at the pub with a video Stuart has made for everyone to see.

In the footage Stuart admits that he made a mistake with Fred – the innocent man he accused of being a paedophile – and promises that he’s given up predator-hunting for good.

He then goes on to explain why he was so into the cause but when Halfway finds out that Mick already knew about Stuart’s experience in juvenile detention he’s hurt.

Whitney tries to talk to Halfway and it seems like she gets through to him as he helps Mick and Stuart put the past behind them.

But later Linda is annoyed when the men get drunk together, and makes her feelings quite obvious.

She heads down to the cellar to change a barrel and is rattled when Stuart comes to help her.

Linda drops some heavy hints that he should leave but she’s left shaken by Stuart’s aggressive response to her.

This follows fans’ fears for the landlady after Stuart clearly held Mick responsible for Fred getting caught up in his predator hunting.

Stuart was recently mistaken when he thought Fred was a paedophile but instead he was actually a father searching for his missing daughter.

But when Stuart was confronted with the truth he had to be forced to back down by Mick.

The pair fought until Stuart agreed to post another video clearing Fred’s name.

And when Mick returned to the pub Linda was horrified by her husband’s battered state.

In an effort to make up for what he helped Stuart do, Mick and Linda visited Fred in the hospital.

While he had been reunited with his daughter, he was in a bad state after Stuart’s video and Mick doubled his efforts to make Stuart see the harm he was doing.

When Mick finds out that Stuart has deliberately intimidated his wife, he’s furious and demands a proper explanation from Stuart.

He doesn’t have one though and tries to pass the whole thing off as a joke, even offering Mick and Linda a gesture of good will to prove he meant no harm.

Will his olive branch work in winning back his old mucker Mick’s trust?

Tina arrives back in Walford after visiting Zsa Zsa and is surprised to see Stuart at the pub but after an awkward start the pair end up going to the clubs 80s night together.

But while everyone else has fun at the theme night things soon take a sinister twist for Tina.

At work the next day Kathy thinks Tina is just hungover, but Sonia quickly spots there’s more to it than that and pulls Tina aside for a chat.

Will Tina reveal the real reason why she’s all over the place after her night out with Stuart?

What do  you think Tina’s hiding? Leave us a comment on our Facebook page @EntertainmentDailyFix and let us know what you think!

EastEnders airs Monday, Tuesday, Thursday and Friday on BBC One. Times may vary due to World Cup fixtures.