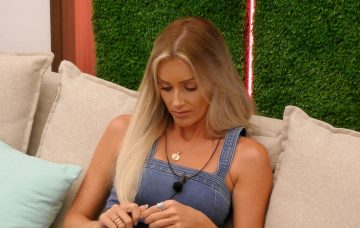 Love Island SPOILER: More heartbreak for Laura as Jack cracks on with Grace

She tried to backtrack on her decision but, unfortunately for her, Jack isn’t interested in giving things another go, saying he agrees that their romance wasn’t going anywhere.

That means Jack is now single… and more than ready to mingle.

On Monday night’s episode it emerges that Jack’s got his eye on Grace, 25, who is currently coupled up with Dr Alex George, 27, in a somewhat passion-less pairing.

And it seems like Grace is returning the interest!

Grace tells Jack she always thought he was “fit” and she fancies him, saying: “The more I’ve seen you around, I just think you’re quite a nice guy so it’ll be nice to get to know you.”

Jack, meanwhile, makes it clear he’s open to exploring a connection between them by telling Grace: “Don’t feel as if you can’t come and chat to me. It’s not like you’re going to step on anyone’s toes. I’m single in here.”

He adds to Grace: “Getting to know you more and more it’s nice. There are a lot of things about you that I think are quite unexpected.”

It’s not good news for Laura, as she’s still holding a torch for Jack and hopeful he’ll change his mind.

Laura tells Alex she’s finding it hard watching Jack and Grace together because she still likes Jack, to which Alex urges her to stay strong.

She says tonight: “For me it’s not over. I really like the boy and it’s annoying because I feel like I like him more now… I hate the fact I fancy the guy again that’s not interested. I have no ego left at all.”

Laura was previously dumped by Wes Nelson after he grew close to Megan Barton Hanson.

She then coupled up with Jack, but ended that relationship after her villa best friend Georgia Steel asked Jack on a date, and Laura feared Jack would ditch her for Georgia.

There’s been SO MUCH DRAMA over whether Georgia and Jack did or did not kiss on their date, too, which left Laura all confused.

Jack’s accused Georgia of trying to kiss him while he backed away, while Georgia has insisted she’s loyal to Laura and that didn’t happen, claiming Jack was actually the more forward one on the date.

Laura has said she also ended her romance with Jack partly because Georgia had made her feel guilty for believing Jack over Georgia, who she has known longer.

But could Jack and Grace’s blossoming romance be over before it begins?!

There will be TWO new arrivals to the villa this evening – two boys! – and two islanders dumped. Drama!

Viewers have been voting for their favourite male and favourite female islander, and the boy and girl with the fewest votes will be sent home immediately.

Who do you want to go home tonight? Leave us a comment on our Facebook page @EntertainmentDailyFix and let us know what you think!