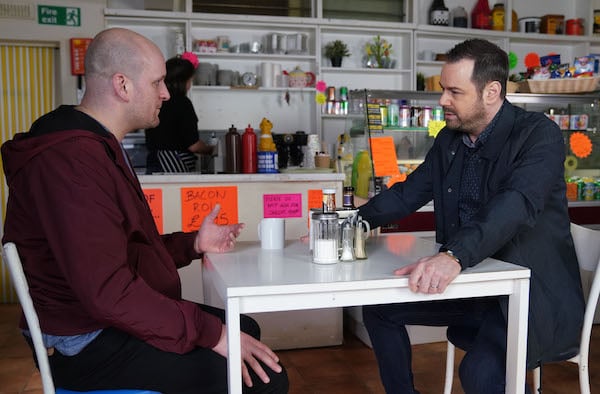 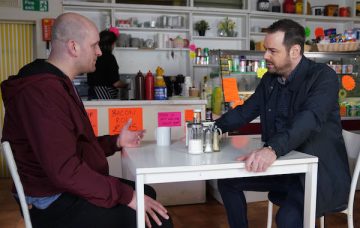 Will he go to the police with what he's found?

Mick is stunned when he makes a shocking discovery while looking at Stuart’s phone – but what did he find that makes him consider going to the police to report his best mate?

With the shocking murder of Shakil still on his mind, Mick is in need of some serious distraction. So wife Linda goes against her better judgement and calls Stuart to come and cheer Mick up.

Realising things must be bad if Linda has called his best friend she doesn’t approve of, Mick’s grateful and tries to enjoy a boys’ day with Stuart and Halfway.

But as the trio are messing about, Mick decides to play a trick on Stuart using his phone, but he doesn’t quite get the reaction he was expecting.

Instead of Stuart finding the prank funny, he flies off the handle, leaving Mick confused.

But what did he see on his friend’s phone that Stuart was so desperate to keep a secret?

Later in the week Mick tries to confront Stuart about what he saw, but it doesn’t go down well.

He is also thrown when he sees Stuart spending time with Ollie a few days later.

Linda leaves Walford for a few days as she heads off to visit Lee, leaving Mick behind who has gone quiet since discovering Stuart’s secret.

But when he catches his best mate watching TV with Shirley and Ollie, Mick sees red and orders Stuart to leave.

Stuart doesn’t seem to get the hint though and spends time reminiscing about old times in the bar – but why isn’t he taking Mick’s threats seriously?

And what could Stuart be hiding that makes Mick against him spending time with his young son?

What do you think Stuart is hiding? Leave us a comment on our Facebook page @EntertainmentDailyFix and let us know what you think!