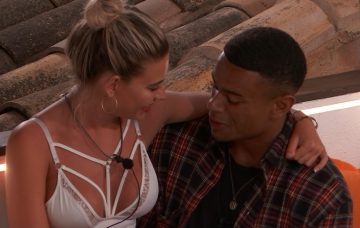 Wes says he's the "happiest man alive" to be with Megan

Love Island’s Wes Nelson and Megan Barton Hanson have admitted they LOVE each other!

In scenes to air on Tuesday night, the couple confess they’re head over heels after officially getting together as boyfriend and girlfriend last week.

Wes is the one to broach the subject, pulling Megan aside for a private chat.

Wes tells Megan that it doesn’t matter if they’re sent home before the final as they’ve found each other and he’s “never been happier” than he is now.

“I’m not going to lie. I do love you and I think I’ve been thinking it a couple of days.”

Wes admits he was concerned Megan might think it’s too early for him to drop the L-word but he has to let her know how he feels.

“I obviously didn’t know how you felt so I didn’t want to say it and then obviously sound really wet,” he confesses.

But luckily for Wes, Megan feels the exact same!

After all, Megan was the one who let slip the L-word first while in bed with Wes last week before quickly retracting it the next day.

Megan tells him: “You know I love you. I said it the other day quietly. I do. I haven’t been this happy in such a long time.”

The couple’s loved up declaration comes after a rather rocky road to happiness.

Wes was initially paired with Laura Anderson when Megan told him she fancied him, prompting Wes to ditch a heartbroken Laura and crack on with Megan.

But then the boys were sent to Casa Amor to meet new ladies while Megan and the girls stayed at the villa with new men.

Wes chose to remain loyal to Megan but she hooked up with newcomer Alex Miller. However, when Wes arrived back at the villa, Megan realised she’d made a mistake and dumped Alex to get back with Wes.

Their exchange of the L-word came after they narrowly avoided being dumped on Monday night.

They found themselves in the bottom three after viewers voted for their least favourite couple: Ellie Brown and Charlie Brake were at the very bottom and went home immediately, while the other islanders had to choose to save either Wes and Megan or Georgia Steel and Sam Bird.

The islanders chose to save Wes and Megan and keep them at the villa.

Georgia and Sam then faced a cruel twist: either split up and stay at the villa single or go home as a couple. They chose the first option and were immediately sent on two dates with the new men and women who arrived on Monday.

Are you happy for Wes and Megan? Leave us a comment on our Facebook page @EntertainmentDailyFix and let us know what you think!