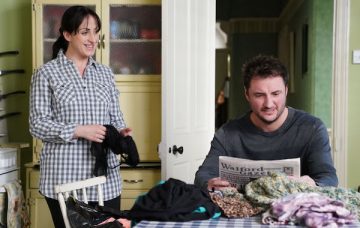 But what about Stacey?

This is the shocking moment when EastEnders’ Sonia Fowler gives in to her resurfacing feelings for ex-husband Martin Fowler and the pair share a kiss.

But while it might look like the former couple are about to be reunited, things aren’t quite what they seem…

Next week EastEnders fans will see Martin gallantly protecting his estranged wife Stacey from an over-familiar man who is flirting with her in the E20 nightclub.

But instead of looking like her knight in shining armour, Martin hurts his back in the scuffle and ends up gripped with pain.

But fear not – his ex wife Sonia is on hand to play nurse and get him back to his usual fully-fit self.

But as the pair spend more and more time together, it seems Sonia might be enjoying looking after her ex a little too much – and even their daughter Bex has noticed.

Noticing the playful flirting going on between her parents, she seizes the moment and reminisces about old times when the three of them were a family.

Sonia is quick to set her daughter straight and tells her there’s nothing between her and Martin… but is she protesting a little too much?

As Martin nods off on the sofa after a doctors appointment, Sonia takes the moment to secretly kiss him – are old feelings resurfacing?

But despite the fact Sonia and Martin will always share so much history together, it is clear he still has feelings for his current wife, Stacey.

When Ian plans a surprise party for Kathy, Sonia goes along with plans to spend the evening with Martin. But when Stacey arrives, it doesn’t take long for her to realise that Sonia has designs on her husband.

As the two women start fighting, it is left to Kat and Mo to stand in and defend Stacey. But the big question is – who does Martin’s heart really lie with?

EastEnders continues Mondays and Fridays at 8pm and Tuesdays and Thursdays at 7.30pm on BBC One

Who do you think Martin is better paired with? Leave us a comment on our Facebook page @EntertainmentDailyFix and let us know what you think!