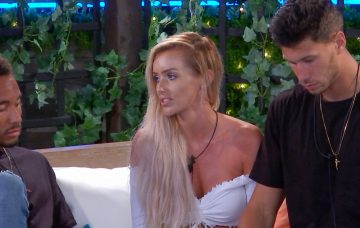 Will things ever just go smoothly for Laura and Jack?

Love Island’s Laura Anderson is worried about her romance with Jack Fowler after a new challenge throws everything up in the air.

The 29-year-old’s time with Jack, 22, hasn’t exactly been smooth after she dumped him over fears Jack would ditch her for Georgia Steel, only to realise she’d made a mistake and wanted him back.

They’re now back together but encountered another bump the other night when new girl Alexandra Cane whisked Jack off on a date, much to Laura’s anger.

Jack, however, made it clear he only has eyes for Laura.

Unfortunately for Laura, there’s yet MORE bad news for her and Jack on Friday night, when a challenge involving viewers’ tweets causes drama.

The islanders are given a bunch of tweets with names blanked out and told to guess which contestants the public are talking about.

One tweet reads: “BLANK isn’t even convincing himself he’s into BLANK let alone me.”

Laura demands to know why the villa thought the tweet was about her and Jack and isn’t happy when Kazimir Crossley suggests it’s because Laura likes Jack more than Jack likes Laura.

Laura immediately recounts the conversation to Jack, saying she’s not happy with Kaz.

She tells him: “In the dressing room, I asked all the girls, ‘what do you think about the tweet about me and Jack, what was your thought process about picking me and him?’

“And Kaz was like, ‘I just think it’s really obvious that you like him more than he likes you.’

But Laura replies: “I just think she’s on her high horse. I don’t like people who get on their high horse.”

Laura insists she’s not that bothered about the tweet before admitting that, yes, it has been playing on her mind and she needs to know why everyone thought it was about her and Jack.

Kaz tells Laura to stop taking everything “so personally” and points out Laura previously ended things with Jack.

She also admits to Laura: “I feel like some girls feel like they can’t say their honest opinion because you are very defensive of it… everyone put you, and even you put you. The fact you went to Jack and said you wanted to end things, following that you changed your mind. I don’t think take it so personally.”

Kaz, meanwhile, isn’t the only one doubting Laura and Jack’s relationship, as Josh Denzel also admits he doesn’t see a “huge amount of positives” in their pairing.

Jack, however, reassures Laura that they’re okay and taking things at their own pace.

Do you think Laura and Jack have a good connection? Leave us a comment on our Facebook page @EntertainmentDailyFix and let us know what you think!