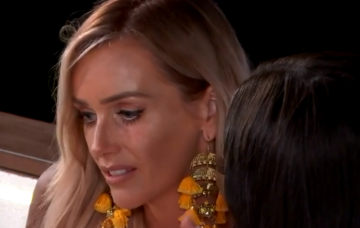 Laura Anderson has revealed she feels like leaving the Love Island villa after Wes Nelson dumped her for Megan Barton Hanson.

Laura and Wes have been coupled up since the start of the show and recently got intimate in the villa.

However, on Tuesday night, Megan confessed to fancying Wes, who also felt the same and put his relationship on cool with Laura to also pursue things with Megan.

On Wednesday’s show, Laura breaks down in tears in the aftermath of her break-up with Wes as fellow islanders Samira Mighty and Dani Dyer try and comfort her.

Speaking about Wes’ change of heart, Laura says: “I assume you know what’s happened. I put up with this for the past four weeks.

“He said, ‘I think there’s something missing, I just want to pursue Megan and get to know Megan.’

“I’m like, ‘Oh, so you’re risking what we’ve got, to see potential in someone else?’ OK, we’ve almost been together for a month, we’ve had sex, you’ve told me you’re falling for me’, and he’s risking all that to try something with Megan.”

As she becomes full of emotion, Laura reveals her true feelings towards the 20-year-old man-child.

She admits: “I was trying to give the boy a chance and do you know what I gave him a chance because he made me feel like he really liked me.

“He told me ‘this is the best first time in a relationship he’s ever had.’

“He’s the only person here that I fancy so obviously I’m going to go for it. I don’t know what else to do, it’s just so embarrassing. I really, really liked him.”

Laura adds: “Do you know what I was so close to saying back to him that I was falling for him, and then he’s just told me that he wants to crack on with Megan.”

Later on, Laura sits down with Megan to figure out the part she’s played in Wes’ decision.

Apologising for swearing at Megan earlier in the evening, Laura says: “This is really, really difficult for me. I can’t call you names.

“Nothing is your fault. I don’t want to call you a [expletive]. That’s completely uncalled for. So I 100% take that back.”

Laura asks Megan when the romance began between her and Wes.

Megan replies: “Literally, it’s been two days. We’ve never spoke until earlier and I took him to the terrace and we spoke.”

But with her emotions running high, Laura admits she doesn’t want to get up in the morning and see Wes and Megan “crack on together”.

She tells Megan: “I just feel like I just wanna go. I’m going to get up in the morning and watch you two crack on together.

“It’s a joke. I just feel like I’ve lost a friendship and a guy in the same night. And I look like a mug.”

And it seems Laura has no plans on rebuilding her friendship with Megan.

She says: “I’m just sad because I feel like it’s going to be awkward with me and you. I don’t feel like I can be friends with you.”

Later in the evening, Wes tries to clear the air with Laura and apologises to her.

He asks her: “Laura, can I have a chat with you?” to which Laura replies: “I don’t want to sorry.”

Wes continues: “I just wanted to say sorry for last night. I didn’t mean it to come across cold, malicious like that.”

Laura says: “What, sleeping in a bed with Megan?”

Wes replies: “It was a mistake. I should not have done it so soon. I’m really sorry for it.”

Ignoring his apology, Laura hits back: “I don’t forgive you.”

Do you think Wes was right to apologise to Laura? Leave us a comment on our Facebook page @EntertainmentDailyFix and let us know what you think!