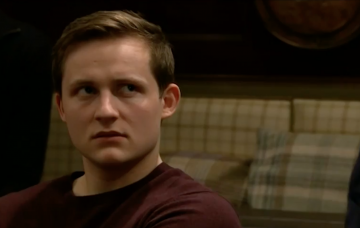 Emmerdale fans had better get ready for a bit more murder and mayhem, as teen killer Lachlan White appears to go to extreme lengths to protect his dark secret.

Lachlan (played by Thomas Atkinson) let his darker impulses take over last year, when he used a car crash to murder his mother, Chrissie, and grandfather Lawrence.

And now he’s desperate to keep the truth hidden – and anyone who knows what happened is in danger.

After leaving a confession on a voicemail to his friend Gerry Roberts (Shaun Thomas), Lachlan put himself in danger, and is working to undo it.

His first – and less violent – attempt appeared to have worked.

He deleted the voicemail from Gerry’s phone, which seemed to be the only piece of evidence he needed to cover up.

The new trailer shows Gerry confronting Lachlan, saying “Your voicemail. I found it.”

He then urges Lachlan to tell Rebecca.

The trailer then shows the two friends on a secluded construction site, with Lachlan appearing to intimidate his friend.

It ends with Gerry crying for help, as Lachlan puts his head in his hands.

So is Lachlan prepared to kill his best friend in order to stay safe? Or is he ready to own up?

Do you think Lachlan is about to kill again? Leave us a comment on our Facebook page @EntertainmentDailyFix and let us know what you think!