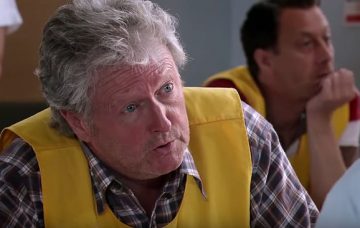 Coronation Street producer Kate Oates has hinted that veteran Jim McDonald will return to Weatherfield hiding a secret battle within himself.

It was confirmed last month that the character would be returning to the cobbles later this year when he is released from prison.

Speaking to RadioTimes.com, Kate revealed that the Corrie crim will be full of resentment towards his family after they turned their backs on him while he was in jail.

Watch out Liz and Steve!

Kate, who resigned as Corrie boss last month, explains: “We have some amazing stuff with Jim McDonald. He’s going to be coming back with a lot of resentment because of what Steve did.

“From Jim’s point of view, he’s been rotting in prison and no one cares.”

She adds: “We also played a story 18 months ago where it seemed like Steve might have inherited a genetic disease from his dad, but no one went to see Jim to ask if he was OK. We have a great story to play with that.”

Fans of the ITV soap will remember that, two years ago, Steve received a call from dad Jim, who told him that he could have myotonic dystrophy, an inherited condition that affects the muscles and causes them to waste away.

At the time, Steve was fretting that the disease could be passed down to his unborn son. But although he received the medical all-clear, viewers have had no word on Jim’s current prognosis…

Jim (played by Charlie Lawson) has been in prison since 2011 after a botched armed robbery.

The character has been in and out of the soap since 1989.

And we’re pretty sure he won’t be received with open arms by any of the Weatherfield residents. Certainly not Peter Barlow, who he harassed in jail.

Will you be glad to see Jim McDonald back on the cobbles? Leave us a comment on our Facebook page @EntertainmentDailyFix and let us know what you think!