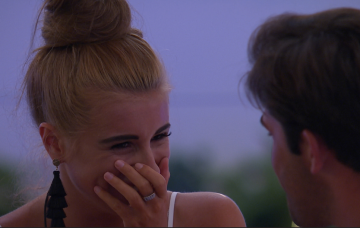 Love Island SPOILER: Jack to ask Dani to take their relationship up a level

Jack Fincham has declared he’s ready to ask Dani Dyer to be his girlfriend on Love Island!

In tonight’s episode, the 26-year-old stationary seller confides in his friends Adam and Eyal that he’s keen to make his relationship with the aspiring actress official – but he’s worried it could jinx their blossoming romance.

He says: “I wanted to speak to you two because I’ll be honest with you, I really feel like I want Dani to be my girlfriend. I do.

“I just feel like I’ve got to that stage now where I do want to leave here with her. I feel like I want that to happen.

“But sometimes, when you put a label on it, it can ruin things, can’t it? That’s what I’m worried about.”

Elaborating further in the Beach Hut, Jack explains how he’s looking for something long-term. So he hopes that doesn’t scare Dani off.

“The next girl I want to be my girlfriend, I don’t want it to be for six months or a year. I’ve done that, it’s boring,” he says.

“The next person I want to go with, I want to make them happy and I want to be with them so it’s a big, massive decision. Not for me, I know how I feel but for her – do you know what I mean?”

Eyal offers some words of wisdom to his friend: “You go with your gut and your heart and what you feel is right.”

Jack replies: “It’s so nerve-wracking because we’ve got something so good now. I want to speak to her, just have a chat with her about feelings. And if it feels right, I’ll ask her.”

Jack and Dani have been coupled up since day one in the villa. Despite a rocky start where Dani wasn’t sure if she just wanted them to be friends, their relationship has since gone from strength to strength.

On Friday night, Jack picked Dani again in the latest re-coupling which saw Rosie Williams dumped from the villa.

In tonight’s episode, viewers will see Jack explain to Dani that she means so much to him after three weeks together, he’s even considering plucking up the courage to meet her famous father Danny Dyer!

He tells her: “It’s weird how I’ve got to this stage where I’m even thinking about wanting to meet your mum and dad and making a good impression.

Dani reassures him: “I definitely think they’ll like you, there’s no reason to not like you, is there?”

Viewers will see Jack eventually mustering the courage to “pop the question” to Dani when they have some time alone on the outside day bed.

The latest step in the couple’s romance comes as they could be rocked by another drama later this week – it’s been reported one of Jack’s exes could be entering the villa!

Do you want Dani and Jack to officially become boyfriend and girlfriend? Leave us a comment on our Facebook page @EntertainmentDailyFix and let us know what you think!