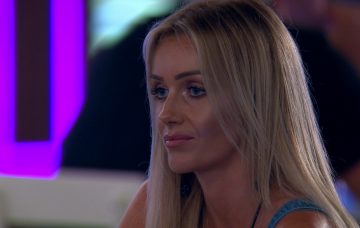 Love Island’s Laura Anderson has dramatically DUMPED partner Jack Fowler after deciding there’s no future for them outside the villa.

But in a twist to air on Sunday night, it seems she’s already having second thoughts about her shock decision…

Viewers will know it’s not been an easy few days for Laura after her best pal in the villa, Georgia Steel, chose to take Jack on a date.

Jack then accused Georgia of trying to kiss him, although she vehemently denied that, leaving Laura very confused as it what went on.

But perhaps it doesn’t really matter, as on Sunday night’s episode Laura admits to Georgia that she is “not really feeling it anyway” with Jack.

Laura insists: “I’m not going to force anything with anyone. Yes, he’s a good looking guy. I know from last night and today he’s not really the one for me and I’m not going to settle and I’m going to tell him.”

Laura, 29, breaks the news to Jack, 22, by saying that although she finds him attractive, she just doesn’t think it’s really working between them and she can’t see how they’d maintain a relationship in the outside world.

Laura adds: “My heart is just not in it and you have to go with your gut and stick by what you believe in and why you’re here.”

But could Laura have different reasons for ending the relationship?

She later tearfully admits to the girls her decision to end things with Jack stemmed from her fear he would choose Georgia and leave her alone.

She also confesses to ending things with Jack partly because Georgia made her feel bad for believing Jack over Georgia, when she’d known Georgia longer.

But it’s clear a confused Laura’s already regretting her decision the morning after, as she tells Jack how much she misses him.

She pleads with him to resume their romance, saying her own insecurities from being poorly treated in previous relationships had kicked in.

But Jack seems a bit unimpressed by it all, telling Laura it’s a “complete mind [bleep]” to dump him the way she did.

Meanwhile, Georgia and Jack continue to argue on Sunday night’s episode over who did or did not try to kiss each other, with Georgia insisting it was Jack who made the first move, and Jack insisting he didn’t instigate anything.

Who is your favourite couple so far? Leave us a comment on our Facebook page @EntertainmentDailyFix and let us know what you think!