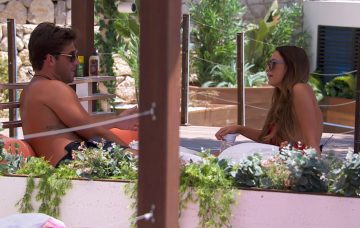 They are clearing the air

Love Island’s Jack Fincham has apologised to ex-girlfriend Ellie Jones for treating her badly in the past.

The pen salesman has been thrown over the last few days after former flame Ellie rocked up in Casa Amor, before coupling up with Sam Bird and moving to the main villa.

It’s also been hard for Jack’s new girlfriend, Dani Dyer, as, let’s face it, who wants to live under the same roof as their beau’s ex, right?

On the last episode, scheming Love Island bosses sent Dani and Ellie out of the villa for drinks together, which led Ellie to explain to Dani why her on-off two-year romance with Jack failed and how she felt he hadn’t treated her well.

Ellie may finally get her closure, however, as Jack decides in Wednesday night’s episode he should say sorry to Ellie for his past behaviour.

He says he’s ready to deliver a “really sincere apology” and “draw the line under it”, as he’s so happy with Dani and wants Ellie to be happy in her next relationship, too.

Jack takes Ellie to one side to follow through on his plan.

He tells her: “I just wanted to say I’m sorry, I didn’t treat you very nicely, I was horrible, I let you down. I wasn’t myself then. I am genuinely sorry for how I acted. I just want you to know that I’m sorry.”

Ellie accepts his apology as she’s moved on from Jack and doesn’t want to interfere with his and Dani’s new romance.

She says: “Now me and Jack have cleared the air, Jack and Dani can now get on with things. I don’t want anything to get in between them, I especially don’t want it to be me.”

Ellie actually has her eye on someone else…

She’s currently coupled with Sam but admits on Thursday night she’s drawn to Wes Nelson, who is single after Megan Barton Hanson ditched him for Alex Miller.

Ellie confesses: “I do find other boys fit and I think, is that a bad thing? I feel bad.”

Could you handle living in a villa with your partner and ex-partner? Leave us a comment on our Facebook page @EntertainmentDailyFix and let us know what you think!