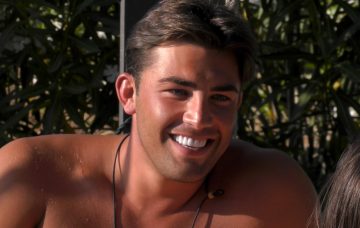 Jack's also worried what Dani is going to think...

In a bombshell twist, the guys have been sent to the Casa Amor villa, where they’re joined by six brand new female islanders.

As ED! previously revealed, one of those islanders – Ellie – has history with Jack. They met last August and had been seeing each other on and off before he left for the villa.

So, naturally, Jack is pretty stunned to encounter Ellie at Casa Amor! Particularly when he’s now in a happy relationship with girlfriend Dani Dyer…

After clocking eyes on Ellie, he admits: “It’s going to be a bit weird. It’s a bit of a weird situation. You don’t expect to have a brand new girlfriend and then the girl that you’ve been sleeping with comes in.”

He’s also a bit worried about how Dani may react when she finds out.

“I don’t think Dani’s going to be best pleased that I spent a few days in the villa with a girl that I’ve been seeing previously,” he frets.

“I wouldn’t be happy either.”

However, perhaps Dani has nothing to worry about because Ellie has already said she has zero interest in getting back with Jack.

She does, though, want to call him up on the fact he was chatting to her just days before leaving for the villa.

Ellie pulls Jack aside for a private chat and admits she feels a “bit awkward” about the whole thing.

Jack agrees, and apologises, saying: “I could have done, and I’m sorry.”

Meanwhile, back at the main villa, the girls have also been joined by new arrivals: six brand new male islanders!

Dani isn’t interested in any of the men; she’s more preoccupied with what Jack may be doing in the other villa.

She admits that while she trusts Jack, she doesn’t like the idea of a gorgeous new girl chatting to him.

“I know Jack’s my boyfriend and stuff and I trust him but I can’t always pull the wool over my eyes,” she says.

“This always happens to me. I get really, really happy with someone and then some girl with a nice bum and boobs who hasn’t eaten cheese toasties every night is going to try and sway him.

“I’d be silly to not worry and I am worried.”

Do you think sending Jack’s ex in is a good twist? Leave us a comment on our Facebook page @EntertainmentDailyFix and let us know what you think!