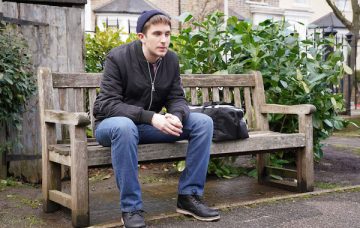 And Linda Carter finds it out...

The path back to Walford has been a rocky one for Callum ‘Halfway’ Highway – with the likeable character displaying some pretty odd behaviour since returning from Afghanistan.

From the minute he set foot in Albert Square, it’s been clear that he’s hiding something – and girlfriend Whitney soon got him to open up…

When she tried to get frisky with him after months apart, the squaddie was forced to admit he was a virgin.

But she soon changed that!

The young soldier had also been hiding a nasty cut in his stomach, which he eventually admitted was a shrapnel wound after a bomb went off as he saved the lives of two kids.

Although Whitney thinks there are no more secrets between them, she is concerned when he starts acting strangely again and ignoring her texts and calls.

And it turns out there’s another surprise in store as the Carters make a shocking discovery about their new tenant – he’s been stealing from them!

When Linda notices that £50 is missing from the till at The Vic, they realise that Halfway must be responsible – but what on earth is he up to?

In a recent interview, actor Tony Clay admitted: “Something’s changed and you start to see him unravel. On the surface, he’s being quite jokey but you begin to wonder what he’s trying to hide.”

What’s your theory about Haflway’s odd behaviour? Leave us a comment on our Facebook page @EntertainmentDailyFix and let us know what you think!