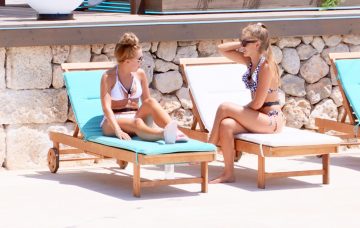 Love Island’s Georgia Steel has admitted to Dani Dyer she and Sam Bird shared a secret kiss despite their split.

Georgia and Sam were forced to split up as part of a shock twist on the show earlier this week, which saw the couple make the decision to either split up and become single, or leave the villa as a couple.

Georgia and Sam decided to break up to keep their places in the villa but it seems that’s not really going to plan.

On Wednesday night’s episode, Georgia is sunbathing with Dani when she reveals she shared a smooch with Sam the previous night.

The night before, Georgia and Sam had expressed their frustration at living together, but not as a couple.

Sam tells her: “I’m struggling big time. I feel like we’re going to be together.”

They then shared a kiss in the bathroom.

As Georgia tells Dani about the kiss, Dani tries to give her some advice.

Dani tells her: “You’re getting yourself in a pickle. Last night you were saying you’re done with him and you’re going to move on now…

“I think Josh is a handsome boy, he’s very forward… You haven’t got to marry the boy, just get to know someone else.

“Be you. Just to cheer you up a little bit because at the end of the day Georgia, you need to recouple or you’re going home so you’ve got to look at it like that.”

Georgia says: “Why do I get myself in such messy situations?”

In the Beach Hut, Georgia admits: “I am trying to curb the feelings for Sam and focus on the new boys. I am trying hard but it’s proving very difficult.”

Later, Dani goes to speak to old Jack and Sam and tells Sam he shouldn’t have kissed Georgia.

Sam says: “My mind is all over the place. I made the decision to crack on with two new girls and then I’m kissing Georgia. What am I doing?”

In the Beach Hut, Sam admits: “I’m trying my best to get to know the new girls, they are really hot but when I’m with them I just think. ‘You’re not Georgia.’”

Meanwhile, later in the episode new Josh is flirting with Georgia by the pool.

Laughing, Georgia replies: “You think we’re made for each other, don’t you babe?”

In the Beach Hut, new Josh says: “Every time I speak to Georgia, she gives me a reason to fancy her even more… It’s very exciting.”

Do you think Dani gave good advice? Leave us a comment on our Facebook page @EntertainmentDailyFix and let us know what you think!