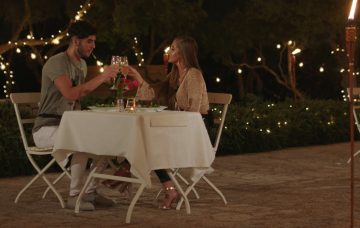 Viewers matched up Niall and newcomer Georgia on Wednesday night

Love Island’s Niall Aslam and Georgia Steel have shared a kiss after hitting it off on their first date – but it leaves Hayley Hughes furious!

The pair were matched by viewers on Wednesday night after Georgia’s late arrival, being sent off alongside Dr Alex George and Rosie Williams to get to know each other.

And it all went VERY well as their date ended with a snog!

Niall is currently single after Adam swooped in and stole his partner, Kendall Rae-Knight, so he had nothing to lose and everything to gain as he enjoyed a drink with Georgia.

He tells Georgia she ticks all the boxes for his “dream girl” – what a compliment!

“My dream girl personality-wise is bubbly and fun, like you,” says Niall. “You seem so bubbly. Just up for a laugh, obviously be fit, which obviously you are but just be fun.”

The pair also bond over a shared dislike of the gym!

Georgia drops the bombshell that she’s never even been to a gym and has no interest in dating a man who spends hours working on his physique.

(Er, does that not rule out quite a few of the male islanders, Georgia?!)

As their date draws to a close, Niall decides to take the plunge and tell Georgia he really fancies her but is worried she may prefer Adam and his 16-pack abs.

He tells Georgia: “I’ll be straight forward, I think you’re absolutely stunning, you are unreal… I just thought straight away [you’d fancy] Adam.”

But Georgia insists that’s not true and she sees “potential” with Niall.

She tells Niall that she “quite likes him”, while he goes one step further and gushes: “I’ve been waiting for someone like you to come through the door.”

After Georgia tells Niall he makes her “feel really special”, he plucks up the confidence to go in for a kiss. Ooh-er!

Back at the villa, Georgia gushes to the Beach Hut: “I never thought that coming in I’d fancy someone straight away but Niall instantly did catch my attention for sure.

However, the kiss between Niall and Georgia does NOT go down well with some of the other islanders…

After Wes Nelson accidentally tells the girls about the kiss, a furious Hayley Hughes – who is paired with Eyal Booker – shouts: “Shut the front door… She hasn’t mentioned that!

Meanwhile, Alex and Rosie’s date also goes well, as they bond over their common interests such as making their parents proud with their respective jobs as a doctor and solicitor.

Rosie tells Alex she wants a man who can make her laugh, adding: “You’re a lovely guy and I’ve got high hopes for you.”

Alex replies: “I’ve got high hopes for you as well.”

Woohoo! Poor Alex has had a tough start to his Love Island experience after nobody stepped forward for him at the first coupling (madness!) and then partner Samira Mighty made it clear she wasn’t interested.

Oh, he also tried to kiss Hayley in a kissing challenge but she turned her head. Harsh!

But Rosie’s arrival has changed things for Alex, who tells the Beach Hut: “I’m feeling much more positive it was great to go on a date and have a nice time with someone and just have a chat. It was cool to have a connection.”

Do you have a favourite islander or coupling yet? Leave us a comment on our Facebook page @EntertainmentDailyFix and let us know what you think!