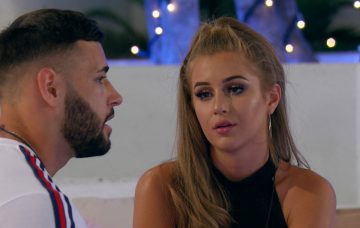 She's happy with how things are between her and Sam

Love Island’s Georgia Steel has told Kieran Nicholls she is happy with Sam Bird and not likely to stray.

The 20-year-old caught the eye of newcomer Kieran this week and he invited her out on a date in a bid to find out if she’d be willing to ditch Sam and coupled up with him.

He’s been grafting her hard, despite knowing Georgia’s coupled with Sam, but unfortunately for Kieran, it’s not going the way he wants…

In Thursday night’s episode, Georgia tells Kieran their date went “really, really well” and she was “flattered” that she had been chosen, but when she returned to the villa all she wanted to do was see Sam.

Undeterred, Kieran presses Georgia on whether she’s okay if he keeps grafting her just in case she changes her mind.

Georgia tells him: “Of course I’m always open but at the moment what I’ve got with Sam right now is really good and probably the best thing I’ve had in this villa.”

Proving her loyalty is to Sam, she decides to be open with Sam about what Kieran said, prompting Sam to call Kieran a “slimy card”.

Sam’s furious that Kieran has been feeding Georgia ideas that Sam’s been smothering her because he’s worried she may go off with Kieran when the truth is Sam’s been around Georgia lots because he likes her.

He accuses Kieran of playing a “low blow” in an angry confrontation.

“What annoyed me mate is that you played a bit of a low blow saying I’ve been smothering her,” Sam tells Kieran.

“The reason we’ve been close today is because I feel really strongly towards her, it’s really hard for Georgia to tell someone how she feels and she did that this morning.”

Kieran, however, sticks to his guns saying they’ll have to “agree to disagree” on Sam’s reasons for spending so much time with Georgia.

But Sam insists Georgia’s just as into him as he is her, and points out Georgia’s so “honest” she’d just outright tell Sam if she wanted him to go away.

Kieran’s now free to turn his full attentions to fellow newbie, Alexandra Cane, who arrived in the villa on Wednesday night.

She invited Dr Alex George and Jack Fowler out for dates, but that hasn’t stopped Kieran and Idris Virgo trying to crack on with her as well!

Jack’s staying loyal to partner Laura Anderson, which means singletons Alex, Kieran and Idris will have to compete among themselves to win Alexandra’s affections.

And the pressure is on as a recoupling and double dumping is looming!

Do you think Georgia and Sam make a good couple? Leave us a comment on our Facebook page @EntertainmentDailyFix and let us know what you think!