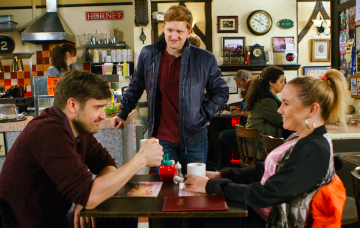 Coronation Street SPOILER: Gemma finds out the ugly truth about her Prince Charming

Her blinkers are about to fall off. Big time.

You know that saying about things that seem too good to be true is usually because they are? Well, Coronation Street’s Gemma Winter looks set to find this out the hard way next week.

It looked like the kebab shop worker was going to get her fairytale ending after meeting handsome (and very rich!) Henry Newton at a party and bonding all night.

He even tracked her down to the cobbles because he wanted to get to know her better. Aww. Or not, as the case may be.

Sadly, it looks very much like Henry is about to prove that Gemma has been kissing a frog, and not a prince all this time.

It all kicks off when Chesney Brown invites Henry to his wedding to Sinead Tinker, as Gemma’s plus one.

Gemma is thrilled, thinking this makes them proper boyfriend and girlfriend now, but it soon becomes obvious that Henry isn’t so keen.

He starts making nasty and condescending comments about the wedding and Gemma, who isn’t used to posh boys like Henry, starts to question if he’s really the man for her.

When the day of the wedding comes round, Gemma clocks the look of disdain on Henry’s face when he arrives at No.5 and won’t sit down.

She wonders if it’s because he’s looking down his nose at Chesney’s home.

Gutted by his response and sick of his sarky comments -which continue throughout the wedding – Gemma dumps him. Which is probably a smart move.

But Henry quickly wins her back, begging for a second chance and admitting he’s fallen for her.

Gemma is delighted, but is she heading for a big fall herself?

Actress Dolly-Rose Campbell explains why Gemma takes Henry back, saying: “At first she is surprised to see him come back but he apologises and he tells her that he really likes her and she falls for him all over again.

“Gemma is a rough diamond but Henry is not really like anybody that she’s known before and she was overwhelmed by him when she met him.”

We’ve already reported that it looks like poor Gemma will get her heartbroken when it’s revealed that Henry is only involved in her as part of a cruel ‘pull-a-pig’ prank.

Last month a source revealed to The Sun: “Now I’m sure a few Corrie viewers will be upset by the soap storyline because it’s a very cruel twist to what many will have imagined was to be a happy scenario for Gemma.

“She will be seen becoming more and more besotted with her mystery new man.

Read more: Emmerdale SPOILER: There’s a shock proposal coming up in the village

“Others on the cobbles soon realise his back story but she won’t have seen the ‘pull-a-pig’ thing coming.”

Will he be Horrid Henry and smash her heart to pieces?