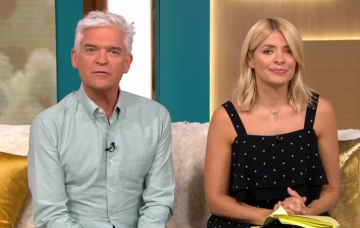 They make their soap debut next week

ITV has released some brand new pictures of Holly Willoughby and Phillip Schofield as they appear as themselves on Coronation Street next week.

The pair are set to star in an episode where they will interview characters Rosie Webster, Gemma Winter and Craig Tinker after an incident bust on the cobbles.

It’s the duo’s first ever soap scene and – as we previously revealed – it will air on Coronation Street on Friday June 8th as part of Rosie’s exit story.

And while we can’t reveal too much about the actual storyline just yet, we can say that Gemma takes a bit of a shine to Phil while Rosie praises Holly as a fashion icon.

But the interview doesn’t quite go as planned – well it wouldn’t with Rosie Webster involved would it?

Holly admitted: “I was excited and nervous. But I actually enjoyed it!”

Phil went on to say: “There are awkward silences during the scene on the sofa. We would never let that happen in real life!”

Earlier this month, Corrie boss Kate Oaes revealed Holly and Phil will be bringing “a bit of fun” to Rosie’s exit scenes.

Kate told the Metro: “Phillip Schofield and Holly Willoughby are coming in for a bit of fun and part of Helen Flanagan’s exit story.

“We’re kind of replaying a bit of a trick we have used before because Rosie has already been on shows but it will be great comedy.”

Helen is expecting her second child with partner Scott Sinclair.

The actress recently told Loose Women that her exit scenes will be “hilarious.”

“I’m going out in very much a Rosie style – the storyline is hilarious,” she explained. “But I have enjoyed that about my character, doing comedy has been great.”

Are you looking forward to seeing Holly and Phil on Corrie? Leave us a comment on our Facebook page @EntertainmentDailyFix and let us know what you think!