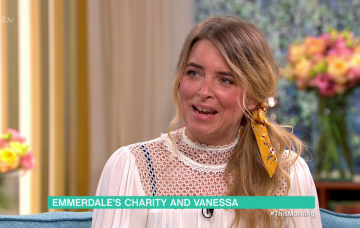 The actress appeared on This Morning

Emma Atkins has teased Emmerdale fans with a tantalising nugget of information about Charity’s future storylines.

Talking about her forthcoming stand-alone flashback episode, the actress has revealed a bombshell will be dropped that nobody yet knows!

Appearing on ITV’s This Morning alongside her on-screen girlfriend Michelle Hardwick – aka Vanessa Woodfield – Emma discussed her current emotional storyline centred around the abuse she suffered at the hands of bent copper DI Bails.

Her character Charity was groomed and raped by the policeman when she was just 14.

She told hosts Holly Willoughby and Phillip Schofield that her character is starting to “make sense” now her history is being explored.

She explained: “It’s quite a wonderful thing, finally understanding why she’s such a pain in the beep.

“I knew she had an illustrious past and had done some awful things and was very attached to being a lady of the night and that it would be explored at some stage.”

Talking about the fact that Charity has kept it a secret for so long, Emma added: “Charity is thinking how can I possibly get the truth to be told when it was so many years ago and how will anyone believe me because I’ve told so many lies in the past?

“But this is such a delicate subject matter that you can’t pretend it didn’t happen and she’s facing these demons now.”

Emma also hinted that a big secret will be revealed in the flashback episode, which will be narrated by the characters of Charity and Vanessa.

She teased: “Charity and Vanessa kind of narrate Charity’s past and the audience go back and see what it was like for her.

“At the very end of the episode the audience are left with this incredible nugget of information that nobody else knows and I love it when they do that.”

This week, Emma finally exposed the truth about DI Bails in a dramatic episode which saw her throw his bribe money in his face – in front of a shocked audience at a police press conference.

But the story is far from over…

Emma admits that Charity will now have lots of “moral decisions and repercussions connected to Bails” following recent scenes.

Can you guess what the bombshell is? Leave us a comment on our Facebook page @EntertainmentDailyFix and let us know what you think!