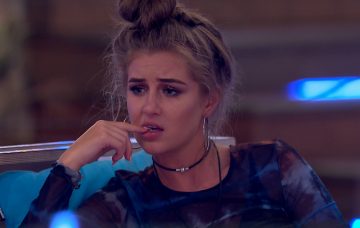 It's all getting VERY heated in the villa

Love Island teased a HUGE row between Georgia Steel and Ellie Brown at the end of Thursday night’s episode.

And now the reason for their surprise clash has been revealed…

Ellie is fuming with Georgia after a rumour sweeps the villa that Georgia tried to kiss her best pal Laura Anderson’s partner Jack Fowler on their recent date.

Viewers will know that Georgia had to invite two boys out on a date and opted for Jack, coupled up with Laura, and Sam Bird, who was coupled with the now-dumped Ellie Jones.

Georgia’s decision to pick Jack went down badly with Laura, who ends up even MORE annoyed on Friday night when Jack tells her Georgia tried to kiss him. Twice. Oh dear…

Basically, Laura feels that Georgia betrayed her by asking out Jack, especially when she knows that Laura was already mugged off by Wes Nelson when he dumped her for Megan Barton Hanson.

Naturally Laura’s concerned that Jack and Georgia could hit it off and she’ll be left heartbroken and single once again.

But Jack tells Laura he can’t see a connection with Georgia after their date, before dropping the bombshell that Georgia tried to kiss him.

He tells Laura: “When we got up to leave, I’ve gone in for a kiss on her cheek and she came in towards me straight on and she kissed me on the lips. Then she went for a two kiss thing and I pulled away the second time because I thought ‘This is so not what I need right now.'”

Well, naturally Laura is livid and immediately confronts Georgia, who denies trying to kiss Jack on the lips and insists it was all a bit accidental.

She says Jack is the one who  tried to kiss HER.

Georgia demands Jack join the conversation to clear things up, but he remains firm that she tried to kiss him a second time.

Jack tells Georgia: “Unintentionally, we kissed on the lips. Agreed. After that kiss, you went in for another little kiss and I backed away. If you didn’t feel that or see that, I don’t know why.”

It all gets quite heated between Georgia and Laura, with a furious Laura demanding to know the truth of what happened on the date.

But Georgia insists she never tried for a second kiss and that her loyalties lie with BFF Laura – although Ellie, who overhears everything, isn’t at all convinced.

Ellie rants in the Beach Hut: “Practice what you preach, Georgia. You’re only as loyal as your actions are. Just by saying you’re loyal twenty times a day, doesn’t make you loyal.”

She also brands Georgia’s claims she didn’t try to kiss Jack as “bull-[bleep]”, prompting a livid Georgia – who hears her – to shout: “Wind your neck in.”

Ellie is adamant Georgia’s in the wrong for coming back to the villa and telling Laura she’s been loyal, when Jack is saying Georgia tried to kiss him – even though she denies doing that on purpose. Confusing? Yes!

Georgia, meanwhile, is fuming that Ellie got involved at all, slamming her as “annoying”.

While Ellie sticks up for Laura, it’s up to Dani Dyer to champion Team Georgia and try to calm everyone down.

The end result is Laura also feeling angry at Dani for not taking her side. Uh oh…

Dani concludes: “I just think Laura needs to have a little bit more trust in Georgia. I know that when you hear something about a boy you like, you instantly might want to believe the boy but realistically I don’t think your friend is going to lie.

“I am going to stick by Georgia and I do believe that Georgia is telling the truth. I’ll have to fight Georgia’s corner until everyone believes her.”

Who is your favourite islander? Leave us a comment on our Facebook page @EntertainmentDailyFix and let us know what you think!