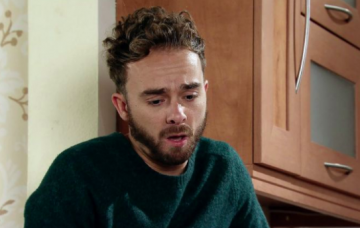 How will he cope?

David Platt’s life will be turned upside down in distressing scenes due to air on Coronation Street next week when his friend Josh Tucker drugs and rapes him on a night out.

Read more: Corrie bosses lining up Tyrone and Fiz to be the new Jack and Vera

David’s had a row with his girlfriend, Shona Ramsey, and Josh invites him on a night out with his mates to let off some steam.

But when Josh arrives at the bar, he’s on his own and makes out his friends have let him down.

He even pretends to get messages from friends saying they can’t make it and Josh’s dark plan becomes clear.

David is none the wiser though and heads off to get more drinks in.

It’s not long before the night takes a dark turn and Josh is determined to get David drunk, making sure he’s drinking more than him.

He then brings up the subject of his parents’ broken relationship, knowing David has the same background, and they compare stories.

David even opens up about Richard Hillman and other things he’ve not really spoken to anyone about, showing how much he trusts Josh.

But when David heads to the toilets, Josh spikes his drink with GHB.

An oblivious David downs it and before long he’s barely conscious and Josh is dragging him back to his flat.

As the drug kicks in, David becomes more and more out of it.

Once inside the flat, Josh throws David face down on the bed and proceeds to undress him before closing the bedroom door on them both.