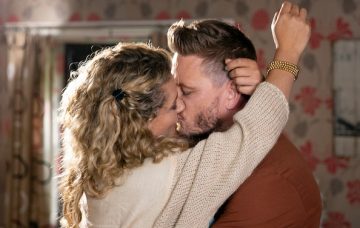 How will his estranged wife Tracy feel when she finds out?

The attraction between David Metcalfe and Maya Cavanagh steps up a gear next week when the pair end up spending the night together.

David and doctor’s wife Maya have been circling each other for the past few weeks, almost kissing last week before being caught by her husband Liam.

But that doesn’t put a stop to their feelings for each other and its not long before one thing leads to another and Maya stays the night with David.

Frank Clayton sees her leaving in the morning and breaks the news to his daughter – David’s estranged wife Tracy.

Tracy has some unexpected news of her own though which leaves Frank stunned.

Meanwhile David has an awkward encounter when he arrives for a check up and realises he’s due to see Liam.

The appointment is very tense and before long Dr Cavanagh is acting in manner not very fitting for a professional!

It was recently revealed that Dr Cavanagh is confirmed to be remaining in the soap as a regular character and viewers are set to see much more of him.

Actor Jonny McPherson has played the doctor for various short stints and appearance since 2014.

And now he’s going to be a full-time cast member after a promotion.

They wrote: “Our wonderful client @jonnymcpherson is a new regular in @emmerdale – say hello to Dr Liam Cavanagh!”

It won’t be a complete surprise for fans with viewers seeing more of his family in recent months.

His wife Maya arrived in March with a memorable dinner party appearance where Tracy told them all about her sex worker past.

And while Maya is set for drama with David, Leanne has shown viewers that the doctor’s daughter is trouble.

She stole Joseph Tate’s car before leaving Sarah Sugden to get arrested and has been leading Jacob astray.

But how will she react to her mum’s affair?

It also means more upset for Jacob Gallagher who is Maya’s student at Hotton Comprehensive.

He’s had more mother figures than most of us have had hot dinners, so will Maya be another flash in the pan?

Or could she and David be in it for the long haul?

What do you think of David and Maya? Leave us a comment on our Facebook page @EntertainmentDailyFix and let us know what you think!