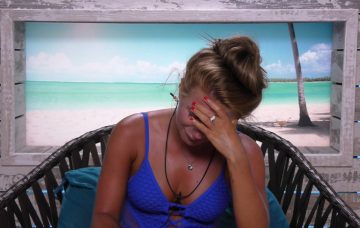 LOVE ISLAND SPOILER: Dani’s in tears over Jack as he drops bombshell

Has Dani lost her faith in Jack?

After admitting her fears that her boyfriend Jack Fincham will meet another girl over in Casa Amor, tonight’s episode will see Love Island’s Dani Dyer break down in tears when she learns his ex, Ellie Jones, has entered the villa.

The bad new is delivered through a text sent to Georgia, linking her to a video of the boys over in Casa Amor.

In the video, Jack can be seen having a heart-to-heart with Ellie, who he was texting just two days before entering the Love Island villa and meeting Dani.

And while viewers are aware that Jack has been sleeping solo outside, and has told Ellie that he has a ‘good thing going with Dani’, Dani is left fretting that her worst nightmare has come true.

As soon as she claps eyes on Jack and stunning brunette Ellie, the barmaid breaks down in tears and goes to the beach hut to vent her feelings.

Earlier in the week, Dani admitted she didn’t want to ‘pull the wool over my eyes’.

She confessed: “This always happens to me. I get really really happy and then some girl comes in, with nice boobs and bum who doesn’t eat cheese toasties every night and tries and tries to sway him.”

Earlier in the episode, both Jack and Dani are consumed with worry, as both villas are invited to take part in another series of challenges to win a party in their villa.

Each challenge arrives by text, and describes a physical act that two islanders must perform on each other – including snogging and even the sucking of each other’s toes. Ew!

But Jack and Dani supporters will be thrilled to learn that the loved-up couple refuse to participate in certain challenges.

When Dani, who said the thought of Jack competing made her ‘sick’ with worry,  is put forward to ‘snog’ newcomer Dean Overton (as both of their initials begin with a ‘D’), she tells her team: “I don’t want to do that. Snog? I got to proper snog? I’m not doing that, sorry guys.”

Over in Casa Amor, Jack is also pining for Dani, and even drops the ‘L’ bombshell!

He later confides in Adam [Collard]: “I keep picturing Dani’s face and I want to see it. I really do. I actually love…I’m not going to lie to you…I love Dani Dyer. I actually love her.”

But after news emerged that the Love Islander’s could be facing a ‘shock cull’ as the two villas merge together, could Jack and Dani be pulled apart for good?

We’re pretty sure a LOT of viewers would have something to say about THAT!

Will you be switching off if Jack and Dani are split up for good? And do you think Dani should trust Jack a little more? Leave us a comment on our Facebook page @EntertainmentDailyFix and let us know what you think!