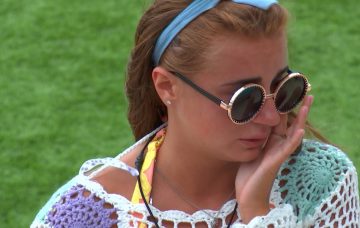 She previously 'friend-zoned' him...

Love Island’s Dani Dyer is left in tears after partner Jack Fincham suggests he would recouple with Hayley Hughes.

The 21-year-old daughter of EastEnders actor Danny Dyer has been coupled with Jack since day one.

But on the latest episode, Dani suggested they just be friends, as Jack’s confession about cheating on two ex-girlfriends had set alarm bells ringing in his head.

Jack agreed that was a good idea but privately told the Beach Hut he was gutted.

On Thursday night’s episode, Jack comes clean to Dani and admits he was hurt to be friend-zoned, much to Dani’s confusion.

She tells him: “I’d rather you be honest with me, all I want is honesty… We’re in a couple to be here for each other and if you feel down, go ‘Dan, I was gutted, I was upset’ rather than you now say it to me.”

Jack says he put on a brave face to make himself feel better and protect Dani from feeling bad about hurting him.

He explains: “I was actually thinking of you a little bit because you would have just felt bad. How is that fair for me to say to you ‘I’m gutted about it,’ it’s mopey isn’t it?”

Dani then tells Jack that if he fancies one of the newbies – Georgia Steel and Rosie Williams – then she’s “cool” with him pursuing another romance.

Jack, however, may have someone else in mind…

During a game of Truth or Dare, he admits he’d recouple with Hayley if there was a recoupling ceremony now, which leaves Dani naturally shocked.

Jack ends up having to explain himself to Dani, saying Dani has made it clear she’s not that keen on a romance with him, so he was shaking things up.

“I didn’t mean anything by it, by the way, I just thought ‘Let’s make it interesting.’ I wasn’t being horrible,” he tells her.

“From our last conversation about us two, you said you don’t know. I want someone to tell me [they do know]. I’d happily wait around, I’ve come here to find someone, I thought I’d found someone I like and you aren’t giving me nothing back. You haven’t actually even tried.”

Jack’s comments make Dani cry so he ends up comforting her.

Dani says she’s just concerned because she’s previously gone for men like him and it hasn’t worked out: “It’s not that I don’t like you. It’s just I worry because you’re what I know.”

Jack, however, advises: “Sometimes stick to what you know.”

Do you have a favourite islander or coupling yet? Leave us a comment on our Facebook page @EntertainmentDailyFix and let us know what you think!