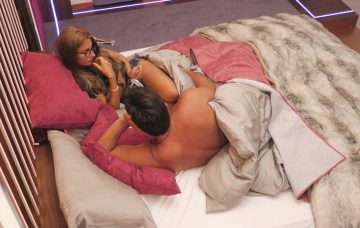 Jack says Dani would be the perfect girlfriend for him

Love Island’s Jack Fincham has told Dani Dyer she is everything he wants in a girlfriend and even alludes to living together after the show, as they spend a romantic night together in the Hideaway.

But Dani warns Jack not to rush things or fall too quickly as he needs to protect his own heart.

On Sunday night’s episode, the couple are given the chance to enter the cosy bedroom away from the prying eyes of the other islanders.

It’s pretty perfect timing, too, as Jack’s been debating whether it’s too soon to ask Dani to go official and become his girlfriend.

They’ve been coupled up since day one in the villa two weeks ago.

He seeks advice from Adam on whether he’s right to wait a bit longer before dropping the girlfriend question; Adam tells him, yes, wait a while longer.

Jack muses: “I thought ‘I need to ask someone else if I’m being crazy.’ Adam agreed with me, and he said ‘don’t ask her out right now’ which I’m not going to, but that’s the page I’m on.

“Dani’s everything I would want in a girlfriend.”

Jack and Dani get the chance to talk about their blossoming romance when the islanders vote them the couple who should be given access to the Hideaway.

Now, the Hideaway usually means a chance for couples to get VERY close away from the other islanders.

Jack assures Dani and viewers he has no intention of having sex with Dani in the Hideaway, he just wants to relish a bit of peace and quiet with her.

He says: “No funny business but it’ll be nice just to be on my own with her, and just chill out and have a laugh really. Just me and Dani. It’s like practise for when we live together.

“It’ll be nice just to have a little bit of alone time. Just us two in a bed, rather thirty people across a room all shouting and screaming. We can proper talk, it will be nice.”

Jack tells Dani that he thinks she’s “lovely”, adding: “In my eyes I’ve found what I wanted to find in a girlfriend.”

Dani is naturally flattered by Jack’s remarks but also warns him she’d like to take things slowly, as she hasn’t been in a relationship for a long time.

She says: “I love that you’re really open with me, I just don’t want you getting ahead of yourself, that’s all. Getting full in too quickly, for your own heart. Getting too excited. The girlfriend thing.”

Jack agrees that he won’t ask Dani to be his girlfriend just yet, but that doesn’t mean he won’t lavish her with treats and attention.

Dani is clearly smitten with Jack and appreciative that he will take things slowly for her.

She says in the Beach Hut: “I’m sure he is frustrated. It’s just proved to me that Jack is in it for the long run and he doesn’t expect nothing from me. He’s really respectful and I do really have feelings for him. Jack is everything I’ve ever wanted, so yeah I’m lucky.”

Do you think Dani and Jack make a good couple? Leave us a comment on our Facebook page @EntertainmentDailyFix and let us know what you think!