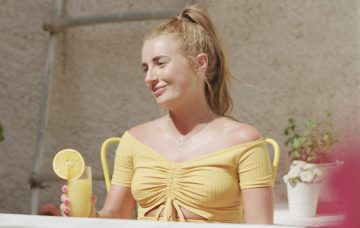 Love Island’s Dani Dyer is forced to go out for drinks with Jack Fincham’s ex, Ellie Jones, in awkward scenes to air tonight.

The 21-year-old hasn’t been too happy with the fact Jack’s former flame Ellie is now in the villa, having coupled up with Sam Bird over at Casa Amor.

After Ellie entered the main villa on Monday night, a thoroughly peeved Dani warned: “She can [bleep] off. I ain’t talking to her.”

Unfortunately for Dani, those drama-loving Love Island bosses have other ideas, and send the two women out of the villa for afternoon drinks on Tuesday night’s episode. Awkward…

It means Dani is forced to interact with Ellie, who has claimed she was speaking to Jack just days before he entered Love Island.

Ellie entered the Casa Amor villa as part of a shock twist, leaving Jack absolutely stunned: but she wasn’t interested in getting him back, instead turning her attentions to Sam.

Dani, however, didn’t know that, as the girls were sent a video clip of Jack’s shocked expression when he saw Ellie arrive, leading Dani to worry Jack might get back with Ellie or Ellie may pursue Jack.

However, Ellie assures Dani that she’s not interested in Jack anymore, explaining: “We were on and off since 2016. I didn’t know he was coming on here.

“That’s what I had the hump about. He could have gone about things a little bit differently with me but he did apologise for that…

“I wouldn’t go back there. He didn’t make me that happy. I was a bit down about it in that situation. He wasn’t the best. He could have just done things a bit differently.”

Meanwhile, back at the villa Jack’s feeling uncomfortable about the whole situation.

Naturally, he’s a bit worried about what his ex-girlfriend could be saying to his current girlfriend over drinks…

He vents in the Beach Hut: “I am absolutely itching to find out what Ellie has been saying about me because I’m guessing I was topic of conversation… All I want to know is what Dani and Ellie spoke about.”

That’s all ANYBODY wants to know at the villa, with the girls also wondering just what Ellie might reveal about Jack and their past relationship.

Unfortunately for Jack, it seems like Ellie could have struck a nerve with Dani, as she returns to the villa with concerns about their romance.

Dani tells Jack she didn’t realise that his relationship with Ellie had been as “intense” as it was, having been on and off for two years.

She admits: “This girl is sitting there telling me all this stuff about you. It’s not nice to hear. It made me worry a bit.”

Viewers will find out on Tuesday night whether Jack can convince Dani not to be worried; it’s bad timing for him too, as the night before he dropped the big L-word, telling Dani he loved her, and Dani responded to say she loved him.

Elsewhere on tonight’s episode, we’ll see Wes revealing his hurt over Megan moving on with new boy Alex, while Georgia confronts Josh about his decision to dump her for Kaz.