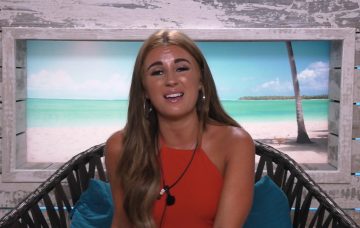 She's sticking up for her pal after recent developments

The 21-year-old daughter of EastEnders star Danny Dyer is furious that Adam’s head has been turned by new arrival Zara McDermott despite being coupled up with Rosie.

Rosie’s made no secret of the fact she’s gutted to see Adam drifting away, particularly as just two nights ago the couple were intimate together in bed.

She thinks Adam is acting off with her and pulling away, but Adam suggests Rosie is the one who is acting strange.

It’s not sitting well with Dani, who confronts Adam on Tuesday night and also vents about him in the Beach Hut.

A visibly annoyed Dani asks: “How long can Adam get away with this for? It upsets me because he’s not really admitting it. He’s basically making Rosie feel like it’s all her fault and ‘this is why I’m doing this’ and ‘my head’s been turned because of this’.”

Dani adds: “No mate it’s just because you want your cake and you want to eat it.

Dani continues to rant that she Adam should have treated Rosie with more respect and been upfront if he had feelings for Zara, rather than brush it off.

“I just think with Adam he needs to move forward and be a little bit more respectful to the way he treats girls,” says Dani.

“Rosie deserves so much better than that. She’s glad she gave Adam another chance just so he could prove that he’s still the same and a leopard never changes his spots I suppose.”

Meanwhile, Rosie vows she’s “done” with Adam in Tuesday’s episode, after he admits to enjoying his date with Zara.

Rosie admits she feels hurt and embarrassed by Adam’s head being turned by Zara, particularly as just two days she and Adam were getting intimate in bed.

She also says she never would have been intimate with Adam if she hadn’t believed Adam was serious about her and a future together.

Do you feel sorry for Rosie? Do Adam and Zara make a good couple? Leave us a comment on our Facebook page @EntertainmentDailyFix and let us know what you think!