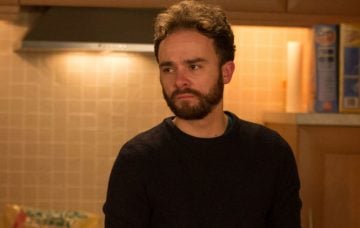 Josh to get away with it?

In the weeks after David Platt’s devastating sexual assault in Coronation Street, fans told themselves that predatory rapist Josh Tucker would eventually get his comeuppance.

ITV viewers watched in horror as Josh continued to intimidate his victim, while David struggled to cope in the aftermath – and refused to tell anyone about his ordeal.

However, we all had hope that one day Josh would pay for what he’d done…

Especially once David tells former girlfriend Shona of the rape in scenes to come next week.

However, Corrie boss Kate Oates has now suggested that David Platt won’t get justice in a court of law.

In an interview with the Radio Times, she reveals she doesn’t want to tie up the story neatly and risk impacting on the powerful discussions that could be had.

Instead, she wants the plot to reflect that rape convictions in the UK are very low.

She told the magazine: “I am not afraid of controversy. It’s more important to reflect the truth. If you tie things up with a bow, there’s a danger people take away from that: ‘It’s all right then, we don’t need to talk about this anymore, it’s done.’

“But it’s not done. There are lots of things within that story that we couldn’t show on screen. If I were going to show that story in court, I’d have been fascinated to have played the truth of it.”

In an interesting revelation, Kate reveals that she is good friends with famous TV judge Robert Rinder, and added: “I hope he doesn’t mind me name dropping here but I am really good friends with (Judge) Robert Rinder and I talked to him about the story and he spoke to me about how he might cross-examine someone on the stand or how someone else might […].

“It’s hard and it’s brutal and you question whether we are set up in the best place to get these convictions? If it were a 9pm drama and we saw David Platt on the stand talking about what had happened to him, a barrister might cross examine him with a huge level of detail to try and discredit him.”

She goes on to say that “it’s important not to artificially tie things up” and that “David’s perpetrator wouldn’t be convicted in this instance”.

Saying that the ending will be surprising, she also reminds us that David has got rid of all of the evidence.

Kate, however, did reassure us that David will get a catharsis and some acknowledgement.

Hmmm, now where’s Pat Phelan when you need him to give a bit of rough justice?

Do you agree with Kate Oates’ decision not to punish Josh in a court of law? Leave us a comment on our Facebook page @EntertainmentDailyFix and let us know what you think!