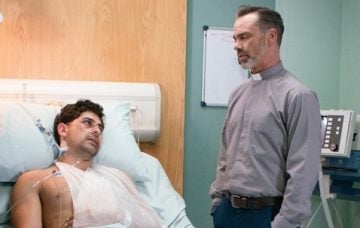 The vicar makes a shocking mistake this week

Josh Tucker is going to be viciously beaten up in Coronation Street and it’s all thanks to Billy Mayhew.

The vicar tries to warn off one of Josh’s potential victims after catching David Platt stalking Josh himself, but it all takes a violent twist when the man Billy warned attacks Josh.

David Platt’s rapist will be left fighting for his life in hospital next week after the attack.

Later, Billy is stunned when the police pay him a visit and tell him that Josh has been beaten to a pulp by the man he spoke to.

A guilt-ridden Billy summons up the courage to go and tell David and Shona what’s happened.

Actor Daniel Brocklebank said: “He feels terrible because he has caused it.

“Yes, he has stopped someone going through the trauma of what David went through but he has now actually managed to get someone beaten up so badly that they are near death.”

Later in the week, David stuns Shona when he reveals to her that he’s been to visit Josh in hospital.

Billy lies to the staff that he’s a relative of Josh’s and sits and his bedside praying for him out of horror of what he has caused.

Josh left Corrie fans sickened back in March when he drugged and raped David after a night out.

Josh spent weeks winning over David’s trust before plotting a night out that ended up being just the two of them.

He then dropped date rape drug GHB into David’s drink before taking him back to his flat and sexually assaulting him.

David didn’t tell anyone about his ordeal instead keeping it to himself and struggling with his mental health until Aidan Connor’s suicide made him realise he wanted to live.

He bravely prepared himself to tell Shona, who he’d dumped in the aftermath of the assault, and was relieved that she believed him and was willing to stand by him.

With Shona’s support, David reported Josh to the police, leaving fans in tears as he relived the vile attack.

Josh was arrested but eventually released without charge as there was no evidence.

But it looks like the villain is about to be served his just desserts in true soap style if these new pictures are anything to go by.

Has Josh got what he deserves? Leave us a comment on our Facebook page @EntertainmentDailyFix and let us know what you think!